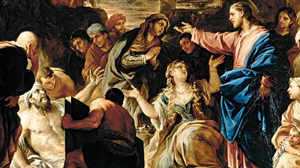 When I entered the seminary as a freshman in high school, our studies in English introduced us to the writings of William Shakespeare; we studied Julius Caesar. Because we had to memorize passages from literature, I and my classmates can still quote from some of the works of “The Bard.”

As I sat down to write this reflection, the first thing that popped into my head was the line from Shakespeare’s Julius Caesar: “A coward dies a thousand times before his death, but the valiant taste of death but once. It seems to me most strange that men should fear, seeing that death, a necessary end, will come when it will come (II,2, Caesar).” Caesar is protesting his courage in the face of omens, auguries and the political climate in Rome, all of which point to his impending assassination.

The thought of impending death does instill fear in the average person. Caesar proclaims his courage in the face of Rome’s desperation which may lead to his death.

In today’s gospel reading, the well-known passage of the raising of Lazarus from the dead, Jesus responds to his disciples who remind him that attempts were made on his life during their recent stay in Judea. “Let us go back to Judea. The disciples said to him, “Rabbi, the Jews were just trying to stone you, and you want to go back there?”

It is true that his healing of the man born blind, and his proclaiming his Divine Sonship have angered the popular leaders so much that they gathered stones to hurl at him (JN 10). He reminds the disciples that he is the “light” for their path, which will keep them from the harms of the darkness (the underworld). If one walks during the day, he does not stumble because he sees the light of this world.

In his response to his disciples, and in the unfolding of the events around the restoration of Lazarus’ life, Jesus asserts his power over death itself. Unlike Caesar, who could only claim the courage to die valiantly, Jesus begins to undermine the power of death over those who believe in his messianic identity.

Jesus elicits this faith in his messianic identity from Martha, when he says to her, “I am the resurrection and the life; whoever believes in me, even if he dies, will live, and everyone who lives and believes in me will never die. Do you believe this?”

Martha’s response is that profession of faith: “Yes, Lord. I have come to believe that you are the Christ, the Son of God, the one who is coming into the world.”

The mission of Christ is not fulfilled in the singular relationship of a believer who calls Christ “savior.” When Jesus asks to be taken to where Lazarus has been laid, he prays before the crowd that has accompanied him with Mary and Martha to the burial site. The prayer of Jesus invokes the witness which he intends to present to the crowd, “Father, I thank you for hearing me. I know that you always hear me; but because of the crowd here I have said this, that they may believe that you sent me.”

The leaders of the people may have rejected Jesus as Messiah, but Jesus addresses the crowd “that they may believe that you sent me.”

The crowd will play a very important role in the week to come. After Palm Sunday, a day of festive chants and procession, will follow the drama of Good Friday, with the shouts of the crowd “Crucify him!”

As we come to the last two weeks of Lent, 2017, have we reinforced our profession of faith in Jesus as Savior, who conquers death for us, so that as a community, we can celebrate the victory over death that Jesus has shown us, and which is ours to share with him and with one another?

Fr. Arthur Carrillo, C.P., is the director of the Missions for Holy Cross Province.  He lives in Chicago, Illinois.