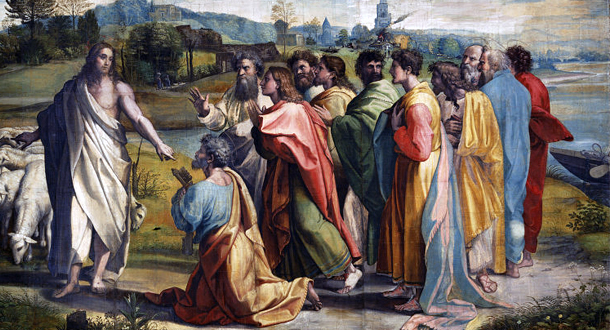 When Jesus was alive, it seemed that the Apostles never understood his true mission.  They came to believe he was the Messiah but were blinded by their assumptions about what the Messiah was to be about.  They were thinking about an earthly kingdom and worldly power.  Jesus challenged them over and over to think beyond their preconceptions, but they managed to cling to their expectations right up to the arrest and death of Jesus.  However, that experience dashed all their hopes and killed their tightly held expectations!  They ended up locked up in an Upper Room filled with fear and darkness.

The resurrection of Jesus caught them totally unawares and changed everything.  After a little confusion at the beginning few days, they quickly took up the new life and vision Jesus offered them.

In today’s reading from the Acts of the Apostles we see them carrying on the mission Jesus had given them with commitment and confidence.  The chief priests and elders had chastised and confined both Peter and John because they kept proclaiming that Jesus was alive.  Yet they were not intimidated or cowed.  They returned to their own people and affirmed that though “Herod, Pontius Pilate, together with the gentiles and the peoples of Israel” had “stood against the Lord’s anointed One,” they themselves would continue “to speak the word of God with boldness.”

The Word of God they continued to speak was not condemnation for the evil acts of the people and their leaders, but rather a word of healing, recalling the signs and wonders done through the name of Jesus.  The Word of God is a Word that brings life to those who hear it and take it to heart.  There is no place in the hearts of the early Apostles for revenge or recriminations.

As disciples of Jesus, we, too, are called to speak the Word of God to our generation.  To do so faithfully our hearts must also be filled with the same love and compassion that is so clear in the life of Jesus and the lives of Peter, John and the other Apostles.  May God continue to open our hearts to his Word of love so that we speak that Word clearly and boldly as did Peter and John.