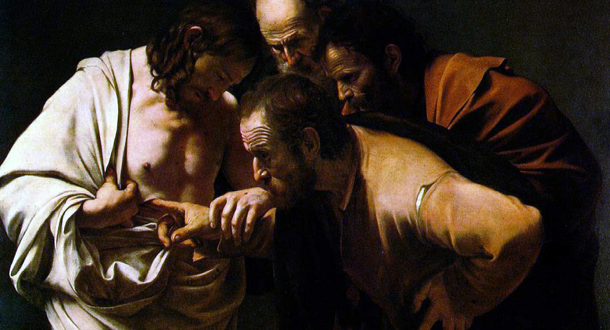 “After this, he appeared in another form to two of them…”

Faith came no easier for first century Christians than it does for us today. No matter how many times the Eleven were told by disciples that they had seen the Risen Lord, they refused to accept their testimony. Jesus finally appears to the Eleven and strongly rebukes them for their “unbelief” and “hardness of heart.”

In this longer addition to the his gospel (Mk 16:9-20,) Mark reports that Jesus appeared first to Mary Magdalene. But then, the evangelist adds a curious observation: “After this, he appeared in another form to two of them…” What does Mark mean by “another form?” We need to recall that even those who saw the Risen Jesus did not recognize him at first. Somehow, the risen body of Jesus is such that he is not recognized until he makes himself known.

To Mary Magdalene, in her profound grief and loneliness as she searches for the body of Jesus in the garden, she recognizes the Risen Jesus at the moment he calls her by name.

To the two disciples, running away from Jerusalem and into the despair of Emmaus, it is at the moment when the stranger breaks bread with them that they recognize the Risen Jesus.

To the Eleven, including Thomas, in their woundedness, no longer whole and complete, no longer “The Twelve,” it is at the moment when Jesus shows them his wounds that they recognize him.

To Peter, who after the crucifixion returned to his old ways as a fisherman, followed the instruction of a stranger on shore on where to cast his nets, and at the moment he caught a miraculous number of fish, he recognized the Risen Jesus.

We are able to recognize the Risen Jesus, it seems clear by now, most often in the midst of our deepest need, where we are most broken.

But not always. Sometimes we are challenged to believe in the Risen Jesus even when we are unable to recognize him at all. In the older, shorter version of Mark’s gospel — that is, the version that does not include today’s reading, 16:9-20 — the women fled from the tomb in terror, even though they were told by the young man dressed in white, that the tomb was empty; Jesus had risen. This ending is abrupt, sudden, open-ended. Mark is reminding us there will be times when we will be called to believe in sheer and radical faith, even without the consolation of a resurrection appearance.

To the Risen Lord, however, it doesn’t matter how strong, how tentative, how shaky our faith may be. He has a commission for us. Just as Mark’s gospel began with the message that it would proclaim the Good News of Jesus Christ to us, so now here at the gospel’s conclusion comes the Risen Lord’s charge to us. We are to proclaim the Good News of the Paschal Mystery to others. And how will others recognize the Risen Jesus? By our wounds, the wounds of the Body of Christ.