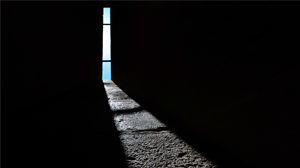 Today the Church celebrates the lives St. Louis, King of France, a crusader, a defender of justice, and patron of the needy; and St. Joseph Calasanz, a theologian and canonist, who was devoted to the education of the poor.  Many of St. Joseph Calasanz’s contemporaries were disturbed because learning would make the poor restless with their plight.

Matthew was writing about an argument in his community.  There was a dispute between the Rabbis of the school of Hillel and the school of Shammai.  One school of thought proposed that one-tenth of the produce of the land was to be tithed.  This would be any increase in livestock, fruit trees, oil, and wine.  The other school of thought said that not only was the above to be tithed, but also “mint, dill, and cumin.”  Matthew’s comment was they “filtered out the gnat while swallowing a camel whole!”

Matthew pronounces a number of “woes.”  He says the Scribes and Pharisees were concerned about “the outside of the cup and the plate.”  They were more concerned with “external cleanliness than with interior cleanliness.”  He goes on to say, they were like “whitewashed sepulchers” nice to look at from the outside, but they were contaminated on the inside.  Tombs were whitewashed so that people could see them even in the night and would avoid them.  To get close to a tomb made one ritually unclean.  Whereas, they should be concerned with the larger realities of Justice, Mercy, and Faithfulness.  He continues to say that “purity” and “integrity” are a matter of the heart.

Paul in his message to the Thessalonians has a similar message to Matthew’s.  The Thessalonians were caught up in -uttering prophecies, divine oracles, forging letters, and concocting rumors of the “second coming.”  Paul encouraged them to be people of courage, in the face of opposition, please God rather than other humans, avoid flattering and greed, be gentle and minister with those you have been called to share your life after the examples of Saints Louis and Joseph Calasanz.  Amen.