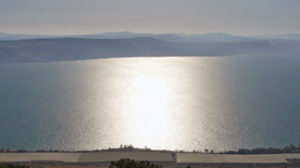 The readings for this day are dominated by one of the longest and most powerful stories in the gospels, namely the healing of the Gerasene demoniac from chapter 5 of Mark’s Gospel.  In Mark’s Gospel the Sea of Galilee stands as a kind of boundary between the Jewish region of Galilee on the west and on the eastern shore, the Gentile region of the Decapolis, the league of ten cities founded in the wake of Alexander the Greats conquest of the Middle East three centuries before the birth of Jesus.  Most of Jesus’ mission takes place in the Jewish area but here, in a rare crossing to the other side of the Sea, he and his disciples land in Gentile territory.

What happens next is a parade example of the kind of “exorcism” stories that abound in Mark’s narrative.  As Jesus and his disciples come ashore, a man who had been dwelling among the tombs confronts him. Already we know something tragic about this man—he is living among tombs, in the abode of the dead.  We then hear a chilling description of his condition. He is wild, uncontrollable yet bound in chains, day and night crying out in torment and abusing himself with stones.  What the evangelist has done is describe, in the manner of his own time and culture, a person who has been completely de-humanized and suffers terrible isolation and mental illness.  We might think of someone we have observed on our city streets, truly down and out.   A few days ago I was in New Orleans for a meeting and noticed how many young people languished on the streets, obviously gripped by drug addiction, looking totally defeated and desolate.

In the view of the gospel this man has become dominated by a terrible evil that is sapping his life away.  For the biblical world, the ultimate root of illness and desolation was the power of the demonic.  Not in the sense that the person’s illness or distress is caused by their own failures but in the deeper conviction that the sting of death is not the work of God but the cost of the mortality that afflicts human nature.

Jesus, on the other hand, is filled with God’s life-giving Spirit.  Mark has stressed this from the very beginning of his gospel when Jesus comes to the Jordan to be baptized by John.  The Spirit descends on God’s beloved son and thus begins Jesus’ life-giving mission of healing and destroying death.  That mission of Jesus is revealed in all of the healing and exorcism stories in the gospel and, in a particular way, through Jesus’ ultimate giving of his life for the sake of the world.

In this gripping story in today’s gospel, Jesus confronts the evil spirit that is destroying this beautiful human life.  The demon’s name is “legion”—a remarkable detail of the story.  The term used here—legio—is actually a Latin word and refers to the Roman legions that held this region in their iron grip.  The gospel signals that the evil Jesus is confronting takes many forms, all of them destructive of human life.  In a touch that the early Jewish Christians would appreciate, Jesus allows the demons to infest a herd of pigs who go crashing down into the water and die.

The story ends in a stark contrast to its beginning.  The man Jesus has liberated from his living death is now calm and restored to his family.  The townspeople who come out to see what had happened are amazed and fearful (a typical reaction in the Bible to a divine intervention); they beg Jesus to leave their region.  But the man whose life Jesus had restored has a very different reaction.  He pleads to be able to stay with Jesus.  But, instead, Jesus asks him to “go home to your family and announce to them all that the Lord in his pity has done for you.”  The man responds and, the gospel notes, begins to proclaim in the region of the Decapolis what Jesus had done for him.  From being a totally lost human being living in the tombs, the Gerasene becomes the first missionary to the Gentiles in the Gospel of Mark!

This is a powerful story of redemption and transformation.  It reveals the very purpose of Jesus’ mission: to liberate us from all the symptoms of death and to give our lives new meaning. Our circumstances may not be as dire as that of the Gadarene demoniac, but all of us are in need of healing and restoration.  As Pope Francis has said, “Jesus reveals the face of the Father’s mercy.” This amazing gospel story proclaims that very message in a compelling way.