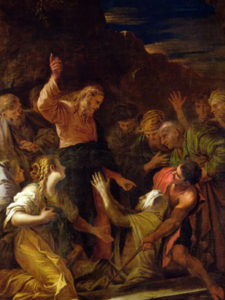 God is truly a mystery! Though God is revealed to us in various ways throughout history, when all is said and done, as much as we discover the immensity of God’s love and mercy, we also find ourselves utterly aware that God’s ways are not our ways. God is love, to be sure, but God is elusive and mysterious, as well.

Ancient Judaism rejected physical manifestations of spirituality and God’s presence, and in place of images and symbols, chose to focus on action and belief. It was Abraham who shattered the golden calf of the weary Israelites after descending from the Mount Sinai with the commandments given to him by God. Even today we know that Jews do not venerate any relics or man-made symbols of the Holy. But there is one exception which we read about in our reading from 1 Samuel. We discover that the people venerated and held holy the Ark of the Covenant. In fact, while in a terrible, losing battle they sent for the ark which was in Shiloh and had it brought to their camp in Ebenezer. The ark was revered as the one and only symbol of the presence of the living God and, as such, was carried by them throughout their wanderings in the desert and accompanied them into battle. Yet, today we read that though there was great rejoicing and a mighty noise arising from the throats of the Israelites, even though they were filled with great confidence and trust in the presence of God represented by this Holy Ark, nonetheless, they suffered great defeat at the hands of the Philistines. God is present; the hearts of the people were enflamed with confidence that victory would be theirs; defeat is the result and terrible suffering after losing the battle. As the scriptures tell us, “It was a disastrous defeat in which Israel lost thirty thousand foot soldiers. The ark of God was captured, and Eli’s two sons, Hophni and Phinehas, were among the dead.” Makes one wonder why, doesn’t it?

Yet, we turn to our Gospel and we see Jesus himself present to the poor, suffering leper, an outcast soul who could never dream of living a normal life again. And in this moment of profound presence and faith, the blind man cries out, ““If you wish, you can make me clean.” And the Lord, so lovingly portraying the mercy of God himself, responds, ““I do will it. Be made clean.” The leprosy left him immediately, and he was made clean.” Through this encounter with Jesus, the Lord, this good man would never be the same again.

Two instances of the manifestation of God’s presence in real life. One moment, a time of battle, and the power of God’s portrayed by the ark itself, which fails to result in the overwhelming victory the people had hoped for by sending for the ark itself. Yet, hundreds of years later, Jesus, the Son of God, whose presence continually reveals the immense mercy and love of God, shows us how amazing and transforming is the love of God even in the life of one who had been doomed to isolation through disease and sickness. Isn’t it the same for us today? Aren’t we puzzled how, even in the lives of good, faith filled people, there can be seeming defeat and darkness? Yet, at times, beyond that darkness, do we not discover the gift of new life and hope that may not have even been anticipated or asked for? God is a mystery. In one moment defeat and in another moment totally surprising healing and restoration. How great is God’s mercy and love. How great is the mystery of God, as well!