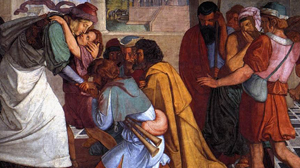 A Happy Ending Just Out of Reach

We conclude today our reading of the Book of Genesis. It’s ending is the ending of the story of Joseph, which we have read for four days; a profoundly meaningful and tender story, hard to read without a tear. Joseph himself cries each of the four days, as do his brothers with him today.

We may think of creation when we hear the Book of Genesis. We have wondrous beginnings indeed, but it lasts only two chapters! The other forty-eight chapters are taken up with a great mystery. How can creation not love the creator? How can it not love the rest of creation? Things get bad: Cain and Able, Sodom and Gomorrah, the flood and the Tower of Babel. Is there a way out?

The final fourteen chapters of Genesis are the story of Joseph. Sold as a slave by his brothers, he is presumed dead by his Father, Jacob. Joseph finds himself a powerful man in the land of Egypt. There is the refrain, “God meant it for the good, to achieve his present end, the survival of my people” (50:20). Our story on Wednesday began when Joseph’s brothers stand before him; he recognizes them, they do not recognize him, but see a severe man of authority. His tenderness is revealed when unable restrain himself he bursts out crying, “I am Joseph…Is my father in good health….I am your brother Joseph, whom you once sold into slavery…do not reproach yourselves…God sent me here ahead of you.”

As Genesis ends it would appear that we have found the solution to all the bad we have heard in the Book of Genesis. Joseph is a man who can forgive those who have sinned against him. He is like God, “a God-fearing man”(42:18). Are our problems resolved. Have we come to a happy ending? Unfortunately, no, we have not.

Jacob dies. The brothers of Joseph are so afraid that they imagine Joseph has kept them alive so as not to upset their elderly, infirm father. They concoct a story saying that Jacob’s final request is a plea for mercy, a plea for their lives from Joseph. Joseph breaks into tears. The brothers throw themselves on the ground before Joseph begging that they become his slaves!

As we conclude our meditation on brokenness in God’s wonderful creation we find a man who forgives injustice and the wrongs against him. He may forgive better than anyone in the Scriptures? But it is not quite enough. His brothers cannot grasp his mercy and forgiveness. Truly this is something to cry about.

We leave Genesis now having seen God’s mercy, and the mercy of a God-like man, Joseph. We are invited to ponder how we the daughters and sons of Eve and Adam, will accept this mercy. It may not be easy? But in the beginning there is creation, there is mercy, and there is the need to embrace that forgiveness.