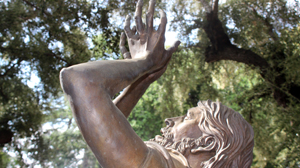 Over the years I have often been asked whether I have read The Da Vinci Code or The Celestine Prophecy. Part of the popularity, even lure, of this literature, it seems to me, is how so many of us want to be special, that is, to know a secret that others don’t know. Fr. Ron Rolheiser reminds us of the parallel in religious circles; for example, in the history of Christianity we have struggled with Gnosticism (esoteric knowledge, understood by or meant for only the select few who have special knowledge) since the first century. Today it might surface in the over-fascination that some folks have with private revelations of self-acclaimed mystics.

Today’s liturgy pulls us in another direction. Jesus tells us that much will be required of those entrusted with much, and still more will be demanded of those persons entrusted with more. Or, as St. Paul says, our bodies are to be weapons for righteousness. Living a rather comfortable and secure life, today’s readings don’t leave me much wiggle room!

And so, I ponder. While we pray today, 80% of Puerto Rico remains without electricity. Or, the United Nations states that the Muslim Rohingya people are one of the most persecuted groups in the world; since 1948, Myanmar security forces have driven them off their land, burned down their mosques and committed widespread looting, arson and rape of Rohingya Muslims. And the crises in Syria, Venezuela, and many other places around the world today also call me to be “a servant of justice”.

In his first letter to the Corinthians (chapter 12), St. Paul said that gifts are given for others, for the common good… not my self-glorification. If the gift doesn’t build up the Body of Christ, it is not of God. That’s a good barometer with which to discern. This is not a matter of fear for not generously using our gifts well; rather, we revel in a sense of gratitude and joy that we are able to give to others.