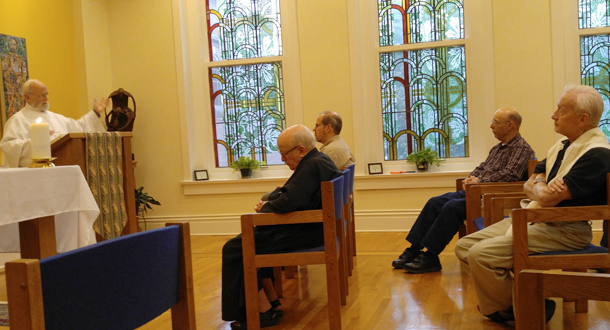 The day begins at Sacred Heart Monastery in Louisville, Kentucky, as it has for decades: in prayer.  The Passionist priests and brothers in residence at Sacred Heart gather at 7:45 to pray the Office each day, and then Mass begins at 8 a.m. The beautiful chapel fills with warm light that streams through the stained glass windows. The men’s voices resonate in prayer and a sense of peace envelopes the space. 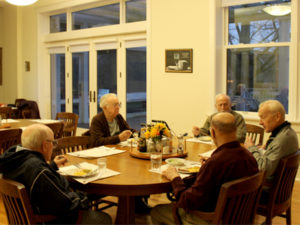 A community breakfast follows and then the men head off in a variety of directions. Some of the more active Passionists will head out for preaching or teaching assignments. But because Sacred Heart Monastery has been designated as the Province residence for senior or infirm Passionists, on any given day Br. John Monzyk, the local superior, or Br. Kurt Wernert, the administrator of assisted living, may be taking one of the several senior Passionists to a doctor’s appointment or conferring with medical staff to ensure that medication is being properly taken.

There is also the building itself to be cared for –Br. John Monzyk can often be found brainstorming with contractors about how to address a leaky roof, for example. Recently a leak was discovered in the Monastery’s basement. Prior to that a campaign was held to replace one of the four pillars that adorns the front entrance because of rot and potential structural damage. Once the new pillar was

in place, all four pillars and the porch above were painted. This project was completed with the helpful generosity of our benefactors. 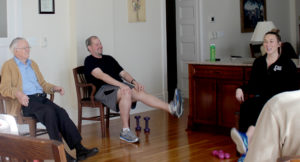 Of the senior Passionists who reside at Sacred Heart Monastery, Fr. Simon Herbers, at 97, is the oldest Passionist in Holy Cross Province. You will often find him in his room, absorbed in a book or working on his newsletter, Think Life, geared toward senior citizens. Each week the men gather for group exercise, led by Lisa. The sessions involve laughter and conversation in addition to the leg and arm “reps.”

There is group prayer again in the early evening, but you may also see a Passionist emerging from prayer in the chapel late at night after the others have gone to bed. Contemplation is a rich part of Passionist spirituality, along with community life and ministry.  In fact, senior Passionists are especially devoted to prayer and view their active prayer life as ongoing service to the Province and Passionist friends and benefactors.