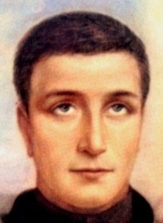 Born to Peter Paul and Cecilia Santamaria on May 4 1883 and baptized Ferdinando the following day.   His parents ran a small rope-making business and they were a devoutly Christian couple.  In an extra-ordinary occasion, Grimoaldo received the sacrament of Confirmation at the unusually young age of five months.   An altar server from a young age, Ferdinando was also a member of the church choir and the Soldality of the Immaculate Conception.  A neighbor testified that on one occasion he saw Ferdinando lifted from the floor while in prayer.  In 1850, members of the Passionist Congregation took possession of a monastery in the locality, and Ferdinando soon became familiar with them, copying their lives of penance.  His father encouraged him to continue working in the family business, but Ferdinando had become convinced that he wanted to join the Passionists.   He was not yet 16 and his age prevented him from entering the monastery. While waiting until he was the required age, Ferdinando took up lessons in Latin.  He entered the novitiate of the Passionists on March 5, 1899 at the monastery of St. Mary of Pugliano, taking the religious name Grimoaldo of the Purification.

The Rule of the Passionists was severe and designed to test the novices with penances such as sleeping on straw, poverty in clothing and the wearing of a rough black tunic.   Grimoaldo was especially keen to model his life on Saint Gabriel of Our Lady of Sorrows, a Passionist student.   He made his vows as a Passionist religious on March 6, 1900.    Grimoaldo began his studies for the priesthood at Ceccano where he found difficulty in adopting a scholastic discipline, a difficulty soon overcome.    Among the Passionists, he was known for his great holiness and charity.   In November 1902 he was diagnosed with acute meningitis and after many trials and temptations he died on November 18, 1902.   On his deathbed he prophesized the date of his own death and that of a Cardinal;

”His Divine Majesty is here, he has come for me today, and I, together with him, must go to Rome for Cardinal Aloisi-Masella.   I must be his companion in death.”