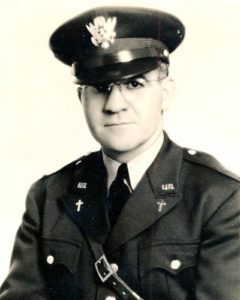 Fr. Denis Mary Keating, CP, was born Joseph Bernard Keating on February 24, 1904 in Langdon, North Dakota. At 18, after helping with the family farm, Joseph entered Langdon High School. He completed his studies in three and one-half years. He loved history and was respected socially in the town. Eventually, in part through the influence of Father Michael O’Brien, C.P., Joseph entered the Passionist Preparatory Seminary in Normandy, Missouri. He professed his vows on August 7, 1930 and took the religious name of Denis. He had the ability to study and also question with a sense of faith and to learn. He was ordained a priest on May 22, 1937.

In October 1941 Father Keating was the first member of Holy Cross Province to be of service to the Military Ordinariate as a military chaplain. He was sent to Camp Livingston, Louisiana in November 1941. After several months with a hospital unit he was transferred to 73rd Brigade, 141st FA. He was promoted to Captain. A year later he was recommended as a Major. However, he was told he could not remain with his regiment as a Major, so he chose to stay at the rank of Captain for the entire duration of the war.

Eventually, his regiment was disbanded and he was transferred overseas with the Fourth Armored Division as their Artillery Chaplain in 1944 and was stationed in Devizes, England. In July 1944, the unit landed in France and Father Keating was wounded in action while administering the Last Rites under fire. He was awarded the Silver Star for action on August 7, 1944 at Point Scorff, France. He was evacuated to England, recovered, and had the opportunity to visit the English Passionists there. Most important were his visits to the places where Cardinal Newman had been in Oxford.

After returning to duty, he was assigned to the Repple-Depot set-up and 456th AAA anti-aircraft work. In December 1941, he attained the position of guard assistance to the staff of General George S. Patton by December, 1941. In May 1945, Fr. Keating arrived at Dachau, the concentration camp near Munich, Germany. He returned to Holy Cross Province in 1945 and was sent to Sacramento, California as one of the first members of Christ the King Retreat. Fr. Keating died suddenly on March 31, 1947, in his sleep.

Below is an excerpt from a letter notifiying Chaplain (Captain) Keating of his Award of the Silver Star:

To Chaplain (Captain) Denis M. Keating, Chaplains Corps, Division Artillery, for gallantry in action against the enemy of the United States on 7 August 1944 at Pont Scorff, France. Chaplain Keating, severely wounded by shrapnel while under heavy enemy artillery fire, calmly continued to administer the last rites to the dying and render first aid to those in need. Chaplain Keating refused to take cover and with dominant, spirited self-control, courageously dragged himself from flaming vehicle to vehicle, many of which were exploding, removing the wounded and assisting in their evacuation. With complete and utter disregard for his own personal safety, Chaplain Keating continued on in his work of mercy until those seriously wounded were cared for. Chaplain Keating’s steadfast, resolute and determined actions reflect the highest credit on himself and the military forces of the United States. Entered military service from Illinois.

By command of Major General Wood.