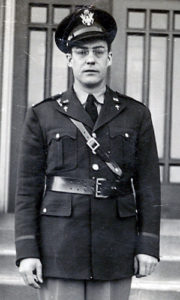 Captain Julius Busse, CP, an Army Chaplain was born Sebastian Busse on March 12, 1907 in Seneca, Kansas, he was the son of Charles Busse and Fredericka Nolte. He grew up in St. Paul, Kansas and in August 1921, after completing the seventh grade, he enrolled in the Passionist Seminary in Normandy, Missouri. In 1925, he entered the novitiate at Louisville, Kentucky and professed his vows on August 3, 1926. Sebastian chose the religious name of Julius. He was ordained December 30, 1931 in Chicago, Illinois. Fr. Julius’s ministries included serving at Holy Family Parish, Ensley, Alabama and preaching parish missions in Des Moines, Iowa.

In 1941 he requested permission to serve as a military chaplain and was accepted on April 8, 1942. As a military chaplain he was assigned to the 17th Infantry of the 7th Infantry Division of the United States Army. He saw action in the Pacific. Prior to deployment the division was located at Ford Ord, California and trained in the Mohave Desert. Their first battle assignment however was the Aleutian Islands at the Attu Island where he received the Silver Star. In 1943 the division was sent to Hawaii and participated in action on the Marshall Islands. He was transferred to Headquarters of the 7th Infantry Division. Next was the campaign in the Philippines where he was wounded in the wrist during the 110 day campaign. He received the Purple Heart and Bronze Star for action of Leyte Island. Later the division was sent to Korea and he participated in the occupation of Okinawa. He left that ministry as a Major on April 11, 1946.

Upon his return to the Holy Cross Province, Fr. Julius was assigned to St. Joseph Retreat, Birmingham, Alabama where he aided in the construction to the residence and was engaged as a preacher of missions. In 1947 he was elected Rector of Louisville, Kentucky.  In 1951 he was elected Rector of Detroit, Michigan until September 1952 when he resigned to participate in the overseas mission to Japan where he was appointed superior of the mission.  Fr. Julius was en route to San Francisco when he fell ill and was diagnosed with cancer, unable to proceed with the Passionists to Japan.  He underwent surgery, and his health improved for a time.  However, the cancer returned and he passed away on July 13, 1954, in Parsons, Kansas.