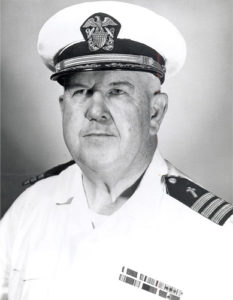 Many Passionists of Holy Cross Province have served as chaplains in the armed forces.  One of these courageous men who served during World War II is Commander Brian Mahedy, CP, United States Navy Reserve.

Fr. Brian Mahedy, CP, was a native of Des Moines, Iowa.  After completing his seminary training, he was ordained a Passionist priest in 1933.  With a profound desire to serve his country and with permission of his superiors, Fr. Brian entered the Navy in June 1943.

He received his basic training in Chaplain School at William and Mary College, Williamsburg, Virginia.  His first assignment was to the U.S. Naval Hospital in Corona, California.  In 1944, while assigned on the hospital ship, the USS Hope, then Lt. Mahedy had his baptism of fire during the battles of Leyte, Luzon, Okinawa and in the Borneo invasion.  He entered Japan with the United States forces and helped establish the Army Hospital in Kyoto.

For his work in evacuating the wounded from the Philippines and Okinawa, Fr. Brian received the Letter of Commendation. He was also awarded the Bronze Star for “meritorious service in connection with military
operations against an enemy of the United States in the Southwest Pacific and Central Pacific areas.”

Upon being separated from active duty service, Fr. Brian immediately entered the Active Reserve.  He was promoted to the rank of Commander in 1956 and continued serving as a reserve officer until 1969.  From 1969 to 1991, Father Brian was a chaplain for hospitals in San Francisco, San Pedro and Long Beach, California.