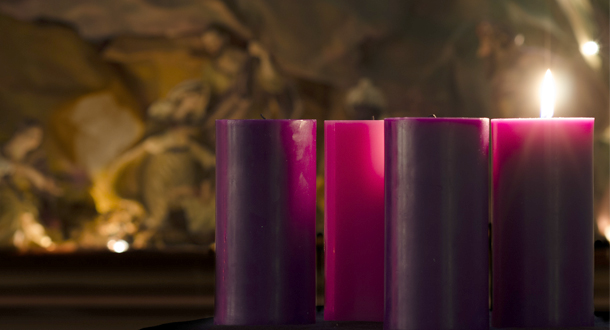 For me, a challenge I face as a homilist is the First Sunday of Advent. That’s because the Gospel reading for the beginning of the Advent season is very much like the Gospel reading for the week before for the Feast of Christ the King. Both Gospel readings have Jesus speaking about the end times, and so it can be challenging to say something different about the same sort of words. But the reason we have Jesus speaking about the end times on a day when we begin as a church to get ready for the celebration of Christmas is that the season of Advent is also about reminding us to be vigilant for when Jesus comes again.

Even though in our Gospel reading for Sunday (Luke 21: 25-28, 34-36), Jesus speaks about the end times, He is not so much talking about fear as about anticipation and readiness. Yes, He does say: “People will die of fright in anticipation of what is coming upon the world, for the powers of the heavens will be shaken.” But He also says: “But when these signs begin to happen, stand erect and raise your heads because your redemption is at hand.” If we are doing what we’ve been called to do, we have nothing to fear when Jesus comes again. We will have been getting ready for His coming our whole lives.

And so Jesus says later on: “Beware that your hearts do not become drowsy from carousing and drunkenness and the anxieties of daily life, and that day catch you by surprise like a trap. For that day will assault everyone who lives on the face of the earth. Be vigilant at all times and pray that you have the strength to escape the tribulations that are imminent and to stand before the Son of Man.”

I wonder if that day “will assault everyone who lives on the face of the earth” because it means a big change in how we relate to each other, and very often, a big change does seem to “assault” us. And I also wonder whether having the “strength to escape the tribulations” means being able to avoid them. I think that what Jesus is saying is that we pray for the strength not to avoid the tribulations (That would mean resorting to “carousing and drunkenness.”), but to not let “anxiety” about them weigh us down. When we can trust in the power and love of God, we can face and get through the tribulations that occur and get to joy and peace.

I was trying to think of examples of this. One that is basic to human existence is childbirth. You mothers who are reading this can speak much more accurately and eloquently about this than I. Other examples are the advances to justice we have seen, such as women’s suffrage, civil rights, the end of apartheid, etc. I say “advances” because we know there is so much more work to be done.

So how can we practice the vigilance Jesus talks about? We can continue to work for justice and peace. We need not fall in line with the divisions and hatreds and fears which seem to have such a hold on our political and social life. We can witness to something different.

Another way that came to me concerns the Eucharist. As I was reflecting on this, I thought of Cardinal Mahoney’s pastoral letter on the Eucharist: “Gather Faithfully Together.” In that letter, Cardinal Mahoney wrote about “The Entrance to the Assembly”: “In houses and apartments all through the neighborhood, the true entrance procession of this Mass has been in full swing, sometimes calm, sometimes hectic. Sunday clothes are being put on…Some households make a conscious effort to keep the morning quiet…”

“When we think about preparing for liturgy, we usually think of the ministers…But the liturgy is the work of the whole assembly…Many have prepared themselves to come together today and participate fully in this Eucharist.”

“So this is the entrance procession, coming from all directions, made up of all ages, several races, a variety of economic circumstances and political outlooks – and speaking at least three first languages! But they are all in a great procession, the Church assembling in the house of the Church.”

The Church comes in procession to encounter Christ in a special way at Mass. As Cardinal Mahoney describes it, a lot of preparation has been made. Is not Advent like that? Preparing ourselves to encounter Jesus when He comes again? To encounter Him as the baby in the manger? Perhaps a way to practice vigilance is to pay attention to how we get ready for Mass.

May we get ready to welcome Jesus this Advent.