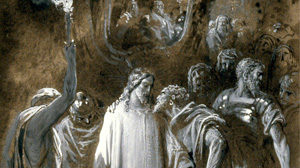 Today, the Wednesday of Holy Week, has traditionally been known as “Spy Wednesday,” prompted by the gospel accounts of Judas’ tragic betrayal of Jesus.  It so happens that this year Spy Wednesday falls on April 1, known as “April Fools Day,” a day celebrated in many countries and cultures as a time for practical jokes.

The gospels certainly don’t see Judas’ action as any kind of practical joke.  It is remarkable, in fact, that the gospel accounts should count among the disciples, the inner circle of Jesus’ original followers, one who would betray him in such a grievous way.  It is hard to imagine that Early Christian tradition would include such an occurrence if in fact it did not have some historical basis that could not be ignored.

The readings for today have a somber, even tragic tone.  The reading from Isaiah speaks of opposition to God’s servant.  He is the subject of insults and even physical violence, being beaten, his beard plucked, and his face spit upon.  The reading anticipates the torments Jesus will endure in his passion when after his condemnation the soldiers abuse him and mock him for his supposed pretensions to royalty.  The lament of the Psalm 69 in the Psalm response echoes this same motif.  The psalmist speaks of the suffering he has to endure, even from his own brethren so much so that he has become “a stranger to my mother’s sons”—reminding us that Jesus’ betrayal will come from one who is close to him, as Judas was.

In the Gospel selection from Matthew’s passion narrative, the disciples are instructed by Jesus to go into Jerusalem and make the preparations for their final Passover together.  But prior to this time, Judas had already gone to the chief priests and agreed to betray his Master for “thirty pieces of silver,” the price set to compensate the owner of a slave who has been gored by an ox in Exodus 21:32.  At the meal itself, just as the Passover celebration gets underway, Jesus reveals to his startled disciples that “one of you will betray me.”  “Surely, it is not I, Lord?” each of them exclaims. But Jesus tells them that the one who has broken bread with him and “dipped his hand into the dish with me” is the one who would betray him.  Judas himself attempts to hide his guilt—“Surely it is not I, Rabbi?”  But Jesus knows his disciple’s wayward heart: “You have said so.”

Why did Judas betray Jesus?  John’s Gospel suggests Judas was a thief and used to steal from the common purse that had been trusted to his care.  So the age-old motive of money may have been in play, something also hinted at in the payment of “thirty pieces of silver” to Judas.  But Matthew casts the story of Judas in terms of broken friendship.  At the Last Supper Judas calls Jesus ‘rabbi” and when the moment of betrayal comes in the garden, Judas will identify Jesus to the armed band with a kiss of betrayal.  For Matthew’s Gospel, then, the tragedy is not simply that of greed but of love betrayed.  Judas is poignantly identified as “one of the Twelve.”  Whatever prompted his betrayal, the tragedy rests in this errant disciple’s turning away from the love and trust that Jesus had placed in him.

In the Passion narrative other disciples besides Judas also fail.  Peter denies he even knows Jesus; all of the disciples flee and leave Jesus alone among his enemies at the moment of his arrest—with Mark’s Gospel indicating one of them even left his clothes behind to flee in a naked panic (Mark 15:51). But later Peter weeps tears of repentance and the disciples will regroup in the upper room and there encounter the Risen Christ and take to heart his words of reconciliation—“peace to you.”  But Judas forgets God’s forgiving love and, as Matthew’s Gospel reports, turns back in despair to the religious leaders with whom he had formed his plot.  It was not a matter of Jesus ceasing to love Judas, even in the midst of betrayal, but of Judas underestimating the unconditional love of Jesus for him:  “Love your enemies, pray for your persecutors.”  That is the gospel message for Spy Wednesday.

Fr. Donald Senior, C.P,. is President Emeritus and Professor of New Testament at Catholic Theological Union.  He lives at the Passionist residence in the Hyde Park neighborhood of Chicago.