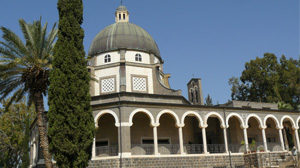 One of my very favorite sites in the Holy Land is a small, simple stone chapel on the northwest corner of the Sea of Galilee.  In recent times it is called the “Church of the Primacy,” commemorating Jesus’ designation of Peter as the leader of the post-resurrection church.  But I prefer its original name, the “Church of the Charcoals.”  For it was here on this lovely spot that the Gospel of John places one of the most exquisite stories in all of the New Testament, the resurrection appearance of Jesus recounted in today’s gospel.

Who could forget this moment?   Peter and several of his fellow disciples, including the Beloved Disciple, the one who is close to Jesus in John’s Gospel but not named, have returned from Jerusalem to Galilee, and one evening Peter decides to go fishing—back to the work he had done before Jesus had walked into his life.  He and his companions fish all night long and catch nothing.  But as dawn breaks, they spot someone standing on the shore. The Gospel tells us their boat was about one hundred yards off shore. He calls out to them, “Lads, have you caught anything to eat?”  When they tell him ‘no’ he tells them to cast their net on the right side of the boat.  They decide to humor this stranger giving them directions from the beach and, to their amazement, they catch more fish than their net can hold.  The Beloved Disciple cries out, “It is the Lord” and Peter, ever impulsive, puts on his clothes and jumps overboard to swim ashore. The others drag the boat ashore with its great catch of fish straining their net.

Even more remarkable than the miracle of the catch is the fact that the Risen Christ is preparing breakfast for his disciples over a charcoal fire! “Bring some of the fish you just caught,” he says, and Peter drags the net ashore.  And then Jesus serves his stunned disciples a breakfast of fresh bread and grilled fish; “come and eat,” he says.  None of them dare to say anything, John’s Gospel notes—perhaps afraid this wondrous moment would suddenly vanish before their eyes.  And then, after breakfast, the miracles continue…  Jesus turns to Peter, the one who during the trial of Jesus had denied that he even knew his Master—not once but three times.  And so the Risen Christ heals that threefold denial by drawing from Peter a threefold expression of his love.  “Simon, son of John, do you love me?”  And Peter, who had wept when he realized he had betrayed his master, is on the point of weeping again— “Lord, you know that I love you…”  And then—with his declarations of love for Jesus made, the Lord gives Peter his commission: “Feed my sheep.”

Could there be a more beautiful story than this?  Could there be any more effective way of stating the deepest meaning of the gospel?   The heart of Christian discipleship is love—the forgiving love of Christ for us, the love of our fellow human beings that the Risen Christ asks of us.  The ultimate motivation for all pastoral authority in the church is also rooted in love— “feed my sheep.”  That is the way John’s Gospel sums up the entire teaching of Jesus: “This is my commandment: love one another as I love you.”