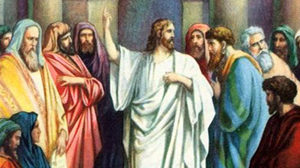 Today is April Fools Day.  The origin of this unusual day is uncertain but the custom of having similar days when people play tricks on others goes far back in history and is spread over a large number of cultures.  The basic idea is to trick someone, usually in a lighthearted way, with some false news or deception.  When the person falls for it, they are labeled, “April fool”!

It so happens that the Scripture readings for today also speak about deception and false information, but not in the lighthearted spirit of April Fools day.  In a reading from Jeremiah we hear one of this mournful prophet’s laments.  His opponents are “hatching plots” against him but Jeremiah has failed to recognize this and suffers the consequences.  He prays that God would vindicate him and punish his enemies.  Even the Psalmist today (Psalm 7) speaks about being pursued by his enemies and cries to God to save him.  The response expresses the Psalmist’s trust in God even in the midst of treachery and falsehood: “O Lord, my God, in you I take refuge.”

Joining in this line-up is a strange passage from the Gospel of John.  Center stage is not Jesus himself but his opponents.  First of all, the crowds who have been listening to Jesus and struck by the beauty and power of his words, wonder who he is.  Some say “the prophet,” others “the Christ.”  But an argument breaks out—if Jesus were the Messiah he would be from Bethlehem as the Scriptures say, and not from Galilee, where they assume Jesus was born (i.e., in the town of Nazareth).  So intense is the debate that it prompts some in the crowd to turn their hostility to Jesus and want to arrest him.

Then we have an episode in which guards who had been sent by the chief priests and Pharisees to arrest Jesus fail to do so because they were dazzled by Jesus’ words: “Never before has anyone spoken like this man.”  But instead of being impressed by the guards’ testimony, Jesus’ opponents conclude these soldiers were deceived.  Nicodemus, one of the group of leaders, however, speaks up for Jesus and the truth: “Does our law condemn a man before it first hears him and finds out what he is doing?”  But the other leaders mock him: “You are not from Galilee also, are you?  Look and see that no prophet arises from Galilee.” (After the death of Jesus, Nicodemus will bring a large quantity of precious oils to anoint the body of Jesus, a sign that he has become a disciple…).

Deception and treachery all around!  There is a lot of discussion today in our political arena about “fake news” and “lying.”  Some would even see such deception as a valid political strategy.  But the readings today remind us that deception and failing to grasp the truth have dire consequences.  In the Sermon on the Mount Jesus told his disciples, “let your ‘yes’ be a ‘yes’ and you ‘no’ be a ‘no’.  We are called as followers of Jesus to speak the truth in love.  Telling lies and publishing falsehoods is ultimately destructive behavior that breaks down trust and leads us in the wrong direction.