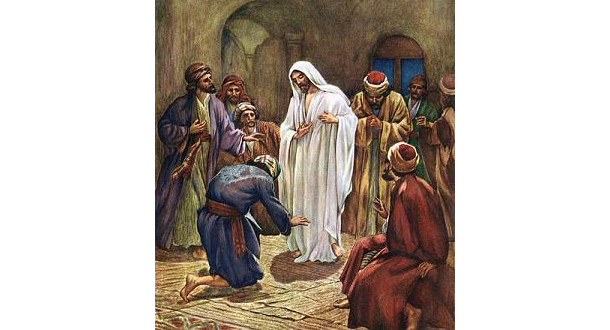 In our Gospel reading from Luke, we hear the account of an appearance of the Risen Jesus to His disciples. In the Gospel, this happens after Jesus has appeared to the two disciples on their way to Emmaus, and after He had been made known to them “in the breaking of bread,” they have returned to Jerusalem, to tell the others.

Similar to the account we heard last week between Jesus and Thomas, Jesus shows the disciples that it is really He by showing them His hands and feet, in other words, by showing them His wounds. He further demonstrates that he is not a ghost or something else by asking them for some food to eat, and then eating it. Again, it is interesting to me that Jesus demonstrates His glory, in a way, by demonstrating His humanity, his wounds and his human needs (hunger).

After Jesus has done for the disciples there what He did for Cleopas and his companion, and opened their minds and hearts to understand the Scriptures in relation to what has happened, Jesus says to them: “Thus it is written that the Christ would suffer and rise from the dead on the third day and that repentance, for the forgiveness of sins, would be preached in his name to all the nations, beginning from Jerusalem. You are witnesses of these things.”

In our first reading from Acts, we hear Peter speak to the people in similar words: “The author of life you put to death, but God raised him from the dead; of this we are witnesses. Now I know, brothers, that you acted out of ignorance, just as your leaders did; but God has thus brought to fulfillment what he had announced beforehand through the mouth of his prophets, that his Christ would suffer. Repent, therefore, and be converted, that your sins may be wiped away.”

The Jesus who has been raised is the same Jesus who is the Son of God become one of us, and so I see repentance as not only sorrow for our sins, but a willingness to turn back to God, a willingness to turn to God in all things, knowing that Jesus understands our human condition, and trusting in His love for us. And so repentance may not need be a melancholy exercise, it can be an exercise in hope in the future and trust in the mercy of God.

The disciples were witnesses of God’s love and mercy. They saw Jesus heal and feed and calm the storm. They saw Him raise Lazarus from the dead. They were witnesses of the power of God’s love. Jesus was not risen in order to avenge His death. He rose in vindication of His sacrifice. He rose to offer the promise of everlasting life to all. Yes, He demonstrated power, but not power as the world so often understands it. He revealed the power of God’s love, a love revealed in mercy and forgiveness and sacrifice. I must confess that I have problems with depictions of Jesus as some kind of warrior king, because I see those depictions as attempts to make God’s power conform to the our notions of worldly power, and so those kinds of images don’t ring true for me.

Do we trust in God’s power? Do we trust in God’s love? It is not always easy to do so, when we see evil or are overcome by anxiety, but celebrating Easter helps us remember the reality of the power of God’s love. May we let go of any attempts to have power over others in trying to control their lives, or getting ahead by holding others back. May we live and speak and act in the power of God’s love in Jesus Christ, trusting in the reality of Resurrection.