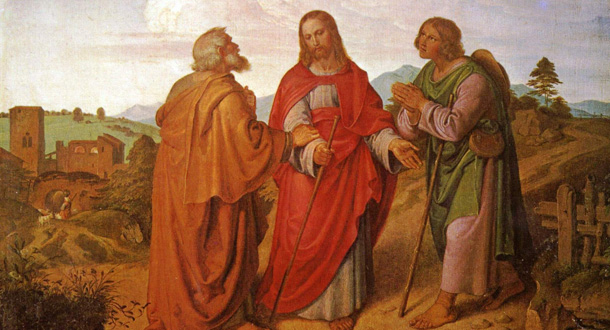 Sitting here, sheltering at home, and thinking about today’s readings, I’ll admit to you; I have favorites.   And when it comes to favorite Gospel accounts, today’s Gospel certainly sits in the top three on my list.  Over the years, as I have heard, read, and prayed with this Gospel. It is extremely applicable to many people in numerous situations and stages of discipleship.

It is the classic story themed around how do you come to know Jesus, and how does Jesus lure you in? It is aligned with some of the other great stories we have just heard in this past Lenten cycle of Jesus, calling people into relationship and bringing that relationship to a very personal and meaningful culmination.   Some of these stories include the Sunday lenten Gospel accounts from John:  the woman at the well, the man born blind, and the relationship Jesus builds with Martha in the story of the raising of Lazarus.

For today, lets simply look at the progression of this Emmaus story.  First, Jesus is merely a stranger who began walking with these two.  It is Jesus who initiates the conversation by asking a simple question.  The two travelers repeat back to Jesus the story they believe.  And Jesus calls them both foolish.  Their stories and interpretations are not resurrection stories.  In fact, after hearing about the empty tomb, they chose to simply walk away. Listening as they recall their expectations, their memories of Jesus, and their interpretation of his death,  their language mimics their body posture.  Luke describes them as “looking downcast.”   Jesus then starts speaking to them about the fulfillment of the Messiah reinterpreting their well-known scriptures.  Certainly, no one has spoken to them like this before.  And we, as the reader of this text, will later discover that this is when their hearts begin burning a little brighter.  He has now moved from being a stranger to being a teacher.   As the day begins to draw to a close, they invite him into their home.  Jesus has now gone from being a teacher to being a guest.  When it is time to share the meal, notice what happens.  Jesus moves from being a guest of the house to the host of the meal as he engages them with those four sacred Eucharistic verbs: taking, blessing, breaking, and giving.  And when their eyes are opened, and they see him, he vanishes from their sight.  He has now moved even closer.  He now is dwelling within their hearts.  Again, this progression; Jesus moves from being stranger to co-journeyer, to teacher, to guest, to host, right into their hearts.  Notice he keeps drawing closer and closer.

Several years back, my office was adjacent to the AA room of the Retreat Center.  One evening after an AA meeting, a middle-aged man stomped in my office and blatantly stated,  Padre, “This isn’t going to work!”  Not sure what he was talking about or even who he was, I replied, “What is not going to work?” He said, “This higher power thing.  It’s not going to work.”  He went on to tell me that he didn’t know of any power greater than himself.  So quickly borrowing a line from the book of Job, I asked him,  “Are you the one who brought forth the sun rising on us today?  Are you the one who placed the stars in the sky?” He thought about that and exited the room as quickly as he entered.

Exactly a week later, he is back for another meeting.  A second time he stomped in my office and said, “Padre, this thing aint going to work.”   “What isn’t going to work,” I responded.  He said,  I go down to the water and speak into the wind blowing in my face, which is a power greater than myself.  But the wind doesn’t hear me.”     What an advancement he had made in just seven days.  He had come to the realization that this higher power needs to be one who can hear, know, and understand.    And he stomped out.

The next week, I got to my office early, expecting the next chapter in the story.  He didn’t show up.  Two weeks later, he walks gently into my office again.  This time his body posture has radically changed.  He asks me a simple question. “Padre, why is God not an alcoholic?”   “Why is that important?” I inquired.   If he was an alcoholic, he would know my lowest places.”   And then I started telling him about the cross and Jesus’ crucifixion was a very low place.  Yes, indeed, Jesus has been to lower places than ourselves.  Within a matter of weeks, this man went from not knowing God to befriending the one who knew him even at his lowest place.  Much like the above-mentioned gospel accounts of the discovery of Jesus, this man has been led to seek and discover Jesus is ahead of him.

How is this applicable to us today?  As a country, nation, and global community, we are at a very low place.  Our future is unpredictable.  How long will we remain in a mode of sheltering at home has not been determined.  How many more will die?  It gets all too frightening when it is people we know.  There are those who want to deal only with optimistic fanciful ideas of resurrection.  Through all of this, there are two things that keep coming back to me.  First, the readings of the Easter season continually draw us into the discovery of the risen Christ.  And this discovery is the glue building up the community of believers.  We are no different.  It may be twenty centuries later, but I testify to how seeing faith through the lenses of resurrection builds up the body of Christ.   It is the discovery of the risen Christ, which roots our faith.  And the second is the encouragement we have from the Gospels.  We don’t have to seek Jesus.  If we are walking with Jesus, he is probably already taking the lead.  Were not our hearts burning within us while he spoke to us on the way?    And it was in the taking, blessing, breaking, and giving that they recognized him.