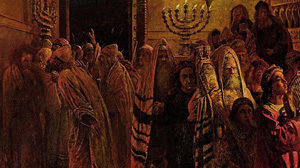 The official religious leaders ordered the apostles to stop speaking in the name of Jesus. The apostles departed the Sanhedrin, the ancient Jewish court and the supreme religious body in the land of Israel.

“They did not stop teaching and proclaiming” the message of Jesus. So much for obedience!

History shows us that disobedience can, at times, be a virtue and much different from a immature disobedience. Jesus was accused of disobedience by performing miracles on the Sabbath. Consider the refusal of the early Christian martyrs to worship the emperor or pagan gods; the decision to help fugitive slaves escape by the Underground Railroad; the risk people took to let Jews hide or escape from the Nazis. We are familiar with Gandhi’s campaign of disobedience in colonial India, and the lunch counter sit-ins and Freedom Rides of the 1960s in the United States.  Martin Luther King espoused the notion of changing unjust laws and government policies through active but non-violent disobedience. The United States was founded on disobedient acts like the Boston Tea Party, the Continental Army and the Declaration of Independence. There are the examples of the people of Tunisia, Egypt and Syria, among some of the nations seeking freedom from unjust laws.

The apostles disobeyed the law and the religious leaders. They were on fire with the spirit of Jesus. They could not keep quiet even when threatened with physical punishment. Today, we can admire the apostles not only for their courage to take up leadership roles in the early Church, not only for their bold preaching, but also because they courageously discerned when it was time to be disobedient. They are examples of ordinary people willing to risk the consequences of being banished from their religious community, being ridiculed, jailed, punished and even put to death.

We are called to protest injustice and evil with means other than force. Protest can be through dialogue, boycotts or disobedience. Yes, we want to be good citizens of the state and faithful Church members, but there are situations that call for an act of mature disobedience as the apostles discerned when faced by the threats of the Sanhedrin officials.