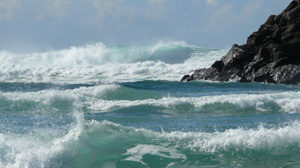 I well recall a time when as a teenager on holidays with my family we undertook a short sea voyage from the mainland of our west Australian coast to the smaller recreational island and National Park named Rottnest Island.

The island is quite famous for the presence of the small marsupial creature called the Quokka – a miniature kangaroo-like creature so small that the first Dutch explorers (of that part of the Australian coastline) having never seen a fully grown kangaroo either, mistook the little creatures for rats! Thus they named the island (in Dutch) “Rottnest” Island (literally Rats Nest Island). But have no fear we were not going to the island to see rats, but a truly remarkable little marsupial (and  member of the kangaroo family) – a species that had been preserved by nature to flourished on this same island due to the lack of any foreign predator like cats or other hunting animals.

However before I digress too far, it was the voyage back from the day’s excursion on the Island that probably proved to be the most exciting part of the day – at least to us boys.

The sea land between the mainland and the island is narrow and as such strong winds can whip up the ocean into tremendous waves with quite some force. The ferry taking us was one of the smaller ones and so it was rocked from side to side and stern to bow! Of course to the four boys in the family this was nothing but fun and a real delight since it seemed like a roller coaster ride. I am sure the ride back for my parents, who no doubt feared the loss of all the family to a drowning at sea, was in fact quite a fearful time!

I recall this moment in my life because I wonder if the phrase “the sea was stirred up because a strong wind was blowing” might provide us with an alternate hypothesis for the origin of the ‘fear’ the disciples experience in today’s gospel. Because strangely enough, the way our text reads for us, it is not the stormy seas themselves that provoke the fears; rather it is the fact that they see Jesus is coming to them across the sea. Despite the wind and waves it is the manifestation of such authority or power by Jesus that seems to generate the fear!

Of course we can speak of the symbolic meaning of the story too and see the boat as an image of the little church setting out to be faithful to Jesus and yet still finding itself caught in huge difficulties and fearful situations much like a storm. But the dilemma still remains – why become fearful only when their Lord and Saviour approaches?

So on either level we have this mysterious presence of fear.

Fear of course can be the dark enemy of faith. By contrast that other factor we call ‘doubt’ can be disturbing, but in fact often resides near and accompanies faith all through one’s life. If all were certain then there’d be little need for faith and so doubt has its place in our spiritual lives and we should not become overly anxious about it.

So not doubt, but fear can be the problem. Fear can paralyse us and turn us away from trust. It can prevent us from thinking clearly let alone acting strongly in the face of injustice or danger. What’s more if we do act, but act from fear, and then it can cause us to make awful decisions.

And fear can strike when we least expect it. Fear of danger – like my family’s stormy sea ride – is natural enough and a response to surprising or unexpected events.  But other fears arise from all sorts of dimensions – from ignorance, superstitions or even belief systems or from moments where we face naked aggression or unknown situations. While many or all of these fears can paralyse us there are moments where they can  also serve to warn us and even save us from dangers.

Such fear can also be at work in our spiritual life too.  Such fear, unexamined and unnamed – and thus untamed – and in opposition to the Spirit’s gentle prompting,  can  keep us at a distance from God’s loving hand or consign Jesus to the role of ‘friend at a distance’ rather than allowing him to be the true soul friend that he wishes to be to each of us.

So perhaps today, rather than seeking a solution to the origins of the fear in our gospel text, we might instead simply note the words of Jesus “It is I. Do not be afraid.

If we make these words a mantra for our own spirit and try to live close to them then we can trust that Jesus will always be near, even coming to us in the stormy times of life, and that we need not fear inviting him ‘in’. For in essence his Spirit lives within us already preparing the way and Jesus himself only seeks to know love and serve us. Let us not be afraid of entering into an intimate sharing with him each and every day of our lives.

If he is present to us, with us, for us and in us, then we have little to fear.