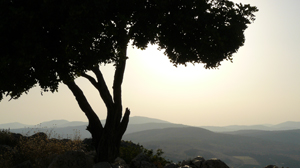 The days of Lent have passed; our Easter celebrations are waning, spring break has come to an end for many young people, and we look forward to the passing of our protracted winter weather.

Today’s first reading, from the Pentecost account of the Apostles’ first preaching foray into the streets of Jerusalem, will be back before us in a few weeks.  But the gospel passage is particularly relevant for us as we spend the Easter Season trying to embrace the meaning of the gospel acclamation, He is risen!

I say, “embrace” very deliberately.  This gospel passage is remarkable for its physicality.  The verbs emphasize that this is no dream, neither is it the “spiritualization” of a belief in the resurrection of Christ.  Mary Magdalen, weeping, bending over to peek into the tomb; two angels, sitting, where the Body of Jesus had been.  They said….She said, They have taken my Lord, I don’t know where they laid him.  She turned, and saw Jesus….Whom are you looking for?…Sir, if you carried him away, tell me where you laid him, and I will take him….Jesus said, Stop holding on to me, I have not yet ascended to the Father….go to my brothers and tell them….Mary went and announced to the disciples, “I have seen the Lord,” and then reported what he had told her.

This bit of the Gospel is rightly cited as an example of the preference given to women in the proclamation of the Gospel message.  It is also an example of how powerful the love of Mary was for her “teacher”.  In spite of the ignominious death of Jesus only three days earlier, Mary is the one who retraces the steps of the burial party back to the tomb, to “peek into the tomb”, and to engage those she finds there in the quest for his body.  Once she recognizes Jesus, she clings to his body.

The message is clear; on the first day of the week following the crucifixion of Jesus, he is present among them; he seeks them out, he comforts and consoles them.  His presence is so powerful, that it gives courage and conviction to the small core of his followers who will be visited by the Holy Spirit on the day of Pentecost, and it will continue to exist in the body of his followers who become the household, the eklesia of Jesus’ presence in the world.  It is a real presence, a tangible presence, a caring presence.