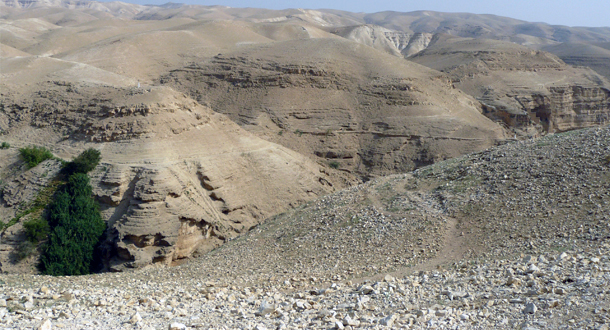 For visitors to the Holy Land, one of the most obvious sights is the fact that the desert areas are not only bleak and sun-bleached to a uniform sandy colour, but all around one sees stones.

Israel is a ‘rocky’ land, almost everywhere one steps one sees stones! Generally, these are small, somewhat rounded, and within easy reach. No wonder then that ‘stoning’ became a regular means of dealing with a speaker whose opinions one did not like – one simply reached down picked up a stone and threw it! The fact that stones were everywhere made it even more possible to be spontaneous in doing this, thus one could very easily give way to emotions and reactions and instantly act on them.

Today we read of a similar moment in the life of Jesus – “So they picked up stones to throw at him;
but Jesus hid and went out of the temple area.”  The cause of this reaction is the profession by Jesus that he is so intimately in union with the Father that he too can claim the title of God. “Jesus said to them, “Amen, amen, I say to you, before Abraham came to be, I AM.”

Apart from the reflection that Jesus lived a life surrounded by danger and that he lived like that for us, we might also look to the revelation that is offered by Jesus’ to the crowd and which caused them to reach for stones to throw.

In his words Jesus reflects a truth that Israel has known from its beginnings. God had been with them since their foundation and God had called them into an intimate union – one we know of as ‘the covenant’.

This life-giving relationship between God an Israel is heavily weighted in their favour. It is God who promises so much – God is with them, God has created their nation, God has given them a fertile land, made them a people set apart and given them their leadership. Most importantly God is faithful and will remain faithful to this covenant.

On their part the people have only to keep the covenant with God. That is, to stay in relationship with God and to see and identify themselves in this light.

Jesus comes to bring this covenant into a fuller light and to reveal completely to them the depth of this relationship with God. Jesus is the Word of God made flesh for them to see and touch, to hear and to embrace.

But as we move closer to the events of Pasion Week and the Triduum we know that such revelation will cause more than mere stones to be thrown at Jesus; rather his very life will be sought and his message and the revelation contained therein seemingly rejected.

But as the refrain reminds us ‘The Lord remembers his covenant forever’ – and we know that God will be faithful to the people even in their rejection of the Son.

Let us enter Holy Week with open hearts, open minds and an open heart that we might truly hear all that is promised to us in the passion, death and resurrection of Jesus.