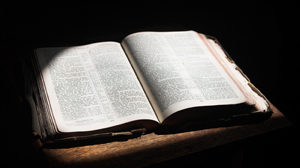 There is a large medical program that is currently quite active and influential.  It goes by the name PRESENCE.  This name is now attached to familiar names of hospital and medical centers that had their own names, such as Holy Cross or St. Luke or Mercy, so that they now read: Presence: Holy Cross Medical  Center, or  Presence: St. Luke Medical Center.  In this new combination of names the effect is achieved of retaining the familiar while enhancing it with the addition of something new.

As we listen to the scriptures assigned for our reflection today, we find ourselves engaging the same kind of factors that are operative in them.  St. Paul, for example, is given an opportunity to stand up in the synagogue in the town of Antioch in Pisidia, and to be invited by the officials in charge of the synagogue to go up onto the podium and to reflect, for the people present there, on the active presence of God in the history of the Jewish people—for all those he was addressing were Jews.

And he gives a great emphasis to the notion of PRESENCE, to which reference was just made.  That is, he talks about the presence of God to the Jewish people over a long time period of hundreds of years, first, in the land of Egypt, then during their long sojourn in the Sinai desert, then on the occasion they gained their long awaited goal of entering the Promised Land, and then of the series of notable kings that rose up from their ranks in the course of their long history.  In all of this time, stretching out over a period of several hundreds of years, the sense of God’s presence to them never left them, and provided an awareness of security and protection.  It was a pillar of their lives.

And Jesus too shows how much the sense of presence factors into His teaching.  He does this in terms of the servant/master relationship, and the messenger /sender relationship.  In each case, the presence of the one evokes a sense of the presence of the other.  Thereby He Implies this pertains to us, that is, if we understand and appreciate this kind of relationship, then we have gained the advantage of operating and acting under its umbrella.  It leads to the conviction that in dealing with the one, we are dealing with the other, so that the sense of presence pervades the interplay of these relationships.  This is foundational in appreciating what we are about in relating to Jesus Himself.  For it moves us beyond the sense of His presence now, in His human form, to the much more awesome awareness of another greater sense of the presence factor in situations other than just now.

These biblical readings bring to our attention a driving force operative in today’s biblical teaching, significant not just for other times and eras, but for all times and eras, ours included.  What drives the dynamism of the bible is that our sense of the present, the here and now, is the conviction that it is empowered and energized by the sense of PRESENCE.  The bible is the story of the driving force of God in our lives.  We often note how the Jews of old lived in the conviction of the coming of the Messiah into their lives.  It was a pervasive sense of divine presence operative at the roots of their history, and the driving force of their energy.  The Jews were on the move through the ages of time, awaiting the Promised One.  That is what intrigued them about Jesus.  Might He not be the long-awaited Messiah?  Was that not what Paul was driving at in his remarks in the synagogue at Antioch in Pisidia as he reviewed the remarkable history of these people to the Jewish congregation there?  Is that not what Jesus is trying to say His listeners: reception of Himself in the here and now is the reception of the One Who is the driving force of Jewish history?

So it leads us to a pivotal question about ourselves.  Are we in a position to put all this behind us because it has been fulfilled and taken care of, so that we no longer need a sense of PRESENCE to energize and empower us?  Does it mean that our engine has been turned on, and we are now empowered with a sense that God’s presence among us has been established, and we no longer have to wait for any further energizing impulse in our lives?  Has the presence of God among us been achieved, so that we simply sit back and relax as wait for it to work its effects in our lives?

The Passionists used to have the practice of fortifying their sense of God operative and active in their lives by forcefully recalling it, especially in their group settings when they were all together, as, for instance, at relaxation or recreational times.  We might be engaged in animated conversation, or in a game of cards, when someone would proclaim in a loud voice, audible to all: PRESENCE OF GOD!  And for a moment of time the awareness of this glaring truth would emblazon itself on our psyches, so that we not forget about it, but regard it as an ever present experience affecting each moment of the day.

Do the Jews have an advantage over us in centering their lives around their deep-seated conviction that the presence of God is a coming event being awaited by them, a coming event that empowers their lives?  On the other hand, have we Christians, convinced that the Messiah has already come, in the person of Christ, been resting on our laurels, no longer in need of any empowerment and energizer in our lives?  Have we gained His presence, so as to be able now to rest and relax?

The medical complex called PRESENCE shrewdly faced this challenge by calling to our attention that the old familiar hospital systems are no longer a thing of the past, but are an ever present factor in our lives, revivifying institutions of the past with a new PRESENCE that enhances their role as the continuous source of medical care and attention that we need as much now as we did years ago.