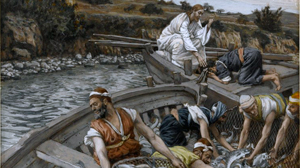 We see the re-emergence and rehabilitation of Peter in today’s readings.  It is a forceful indication of the power of the resurrection in the life of this colorful apostle.  We catch glimpses of him rising to reclaim leadership among the apostles, in both Judaea and Galilee.

The second incident presented in the day’s readings occurred in Galilee, showing Peter, with several of his companions, following the directions of the risen Jesus to meet Him back up in Galilee.  This, of course, would have met with Peter’s satisfaction at returning to his native area with its bitter-sweet memories, and await some further encounter with Jesus.  In fact, it would have been good news for a number of the apostles, several of whom claimed Galilee as their native place.  And it would give them the opportunity to move out of Judea where they had so recently led a tortuous existence in an area where their Lord and Master had undergone such brutal treatment and rejection.  Above all, it would enable at least some of them to pick up fishing again at their favorite place, the sea of Tiberias.

Fishing, for those who engage in it, seems to be a wonderfully restorative past-time, and as they set out on it yet once again, it would have revived memories of doing it in past times with Jesus Himself in the boat with them—some of the times pleasant, at other times frightening.  And, on this occasion, as they pushed off out into the deep, it would remind them of the occasions when Jesus joined them, and gave them some good advice on likely rewarding fishing areas.  And that’s partially replayed this time, though on this occasion, as once before, Jesus is standing on shore while they were out seeking a good slew of fish, and they strike it rich with Jesus, once again advising them from His vantage point, about where the fish were gathering.

His help led to an abundant haul, and a tasty breakfast, provided by Him.  Once again, it was John’s sharp eye that noted it was Jesus on the shore, but it was Peter’s excitement that powered the boat to shore.  This was like déjà vu, the good ole times being replayed.  Only this time, the apostles with Peter were veterans seasoned in the tragedies of life, no longer care-free fishermen whose sole focus was a good haul.  Peter was to be rehabilitated here on his favorite lake doing what he does best.

But in conjunction with this, the day’s reading restores another narrative of these post-Easter days in Judea, the place of bitter memories, as well as consoling ones, and the scene of a confident Peter and John striding through a temple gate and encountering a crippled beggar who receives more from them than he had bargained for, as the miraculously cured man leaps to his feet.   And the uproar caused by this reached all the way to the guardians of the peace, and a night for Peter and John in custody.  And when presented to the powers-that-be the next morning, Peter and John made no bones about it: it was through the power of Jesus Christ Whom they nailed to the cross that the crippled man was healed.  There was almost defiance and a swagger in these confrontational remarks of Peter to them.

Certainly, we have a new Peter here.  He’s a better fisherman, and a better spokesperson for the newly formulated faith.  He’s a new man.