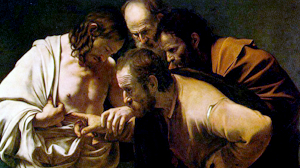 As we continue our Easter season, our Gospel reading is the account of the encounter between the Risen Jesus and the apostle Thomas. There’s an aspect to Thomas’ experience that is important to remember as we strive to bring hope to others in this season of hope.

In John’s Gospel, Jesus appears to the apostles even though the doors are locked. Jesus says, “Peace be with you.” He shows them His wounds, and they rejoice at recognizing Him. He commissions them, and breathes on them the Holy Spirit.

But as John tells us, one of the apostles is not there: Thomas. And when the others try to tell him the Good News that Jesus is risen, he will not believe them. He will only believe when he can see Jesus for himself.

Why does Thomas doubt the word of His companions? For me, it is because Thomas is so hurt by what he saw happen to the One who he believed to be the Messiah, that he might have told himself that he would never believe in anyone like that again, so that he would never hurt like that again. There are times when we may refrain from getting close to someone, or not put our trust in someone because we’ve been hurt before, and we don’t want to be hurt again. But Jesus appears again a week later, with Thomas present, and shows Thomas His wounds, and Thomas believes, and says, “My Lord and my God!” Thomas is healed.

One of the things that strikes me about this encounter is where it happened. Jesus could have appeared to Thomas as He did to Mary Magdalene, when Jesus would have caught Thomas alone. But Thomas’ pain is healed when he is with the other disciples. Jesus appears to Thomas in the midst of the community.

That, to me, is the important aspect I mentioned earlier. It is in the context of community that Thomas experiences the risen Jesus. In our first reading from the Acts of the Apostles, Luke portrays the early Christian community as one in which they had all things in common, and they combined their resources to supply the needs of everyone in the community. Luke tells us that “many wonders and signs were done through the apostles.”

I wonder at what “signs and wonders” might be seen if more and more of us came together. What would happen if we dedicated ourselves to making sure that everyone’s needs would be met? But it takes effort to grow community. We know the effort that has gone into doing violence to others, to even kill people. If we are called to help bring the hope of Easter to others, are we not called to put in the effort to come together, realizing the power God can unleash through a community?

May we come together to bring the hope of the Resurrection to a world too hurt to be willing to believe.