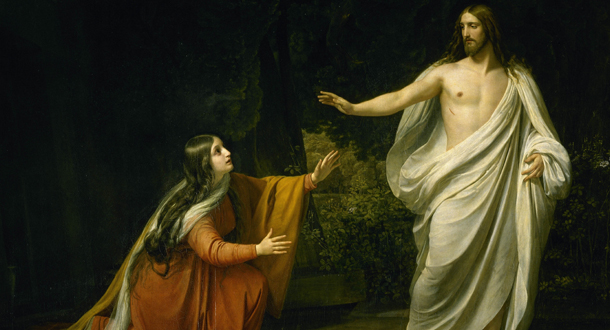 In today’s Gospel reading, Mary of Magdala is outside of the tomb where Jesus was. She is weeping because even though the tomb is empty, her only conclusion at that point is that someone has come and taken His body. And even though she sees two angels in the tomb who ask her, “Woman, why are you weeping?” she is still intent on finding Him.

When Jesus does appear, she doesn’t recognize Him until He calls her by name: “Mary!” and then, at least in my imagination, she hangs on to Him for dear life. And so Jesus says, “Stop holding on to me, for I have not yet ascended to the Father, but go to my brothers and tell them, ‘I am going to my Father and your Father, to my God and your God.’” And so she goes and announces to the disciples that she has “seen the Lord.”

The founder of the Passionists, St. Paul of the Cross, would often counsel those who were receiving spiritual direction from him not to get too attached to the feelings they had when they had a “mountaintop” experience” of God. He would invite them to focus on the Giver, not the gifts. Their goal was not to capture or recapture good feelings, but to seek God’s will. I see some of this between Jesus and Mary Magdalene. Jesus tells Mary not to hold on to Him because there is something He still needs to do: ascend to the Father so that the Holy Spirit may come. At the same time, she is not to hold on to Him, because there is something she needs to do: to tell the other disciples what she has seen and heard. Mary could not be “the apostle to the apostles” unless she lets go of holding on to Him.

And so, we are not to get too caught up in our feelings that we miss the signs that God sends indicating God’s will for us. Instead, we continue to seek and do God’s will, always in the hope we have in the Resurrection of Jesus.