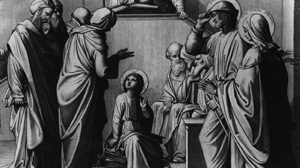 Who are You, Lord?

Some questions are of practical interest to us, but of little value. “At a movie theater which arm rest is yours?”  There are other questions upon which our destiny depends.   Paul’s question in today’s liturgy is the most important one of our life:  “Who are you, Lord?”.

The original Greek even rhymes tis ae Kupiae. Tis is an interrogative reference to someone or something—‘who? what?’ It is an often repeated question addressed to Jesus in New Testament.  “And they were all amazed, so that they questioned among themselves, saying, “What (tis) is this? A new teaching with authority! He commands even the unclean spirits, and they obey him.” Mk 1:27    “And they were filled with great fear and said to one another, “Who (tis) is this, that even the wind

and the sea obey him?” Mk 4:41   “And on the Sabbath he began to teach in the synagogue, and many who heard him were astonished, saying, “Where did this man get these things? What is the wisdom given to him? How are such mighty works done by his hands?” Mk 6:2  This last question came from

With Paul we can ask a thousand times a day: who are you Lord?

Paul came to understand with the help of the Church in “a man named Ananias” who came in and laid his hands on him, so that he might regain his sight.  “Brother Saul, the Lord Jesus, who appeared to you on the road by which you were coming, has sent me so that you may regain your sight and be filled with the Holy Spirit.”  And immediately there fell from his eyes something like scales, and he regained his sight, and he got up and was baptized; There is a long biblical tradition that tells of eyes that cannot see the world of God.   Human eyes are often covered as with scales (lepis) so they do not see the Divine.  “Now Samuel did not yet (teh’-rem) know the LORD, and the word of the LORD had not yet (teh’-rem) been revealed (galah) to him.” 1 Sam 3:7   In the history of man’s journey to God there are many “not yets”.   Samuel’s eye had to be uncovered (galah) so he could see God’s call.

There will always be a “not yet” in our efforts to really know Christ without the Holy Spirit. It is the role of the Holy Spirit to uncover the Impenetrable and stunning reality of the Risen Christ.