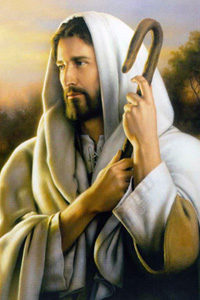 Jesus as the Good Shepherd appears very early in Christian art, as early as the 3rd century in the catacombs of Rome.  From the beginning, the passage from the Gospel of John, “I am the good shepherd. The good shepherd lays down his life for the sheep” (John 10.11), resonated with the early Christian community that must have taken great comfort in that image.  They knew what shepherds were, what kind of life they lived, and what dangers sheep and shepherd alike faced.

The early Christians faced the same dangers at the hands of their persecutors from the time of Nero (64 A.D.) until Constantine forged the Edit of Milan in the 4th century that legally recognized Christians.  The Good Shepherd was there for them as they hid or were martyred.  Jesus laid down his life for those entrusted to his care.

Pope Francis often refers to this image of the Good Shepherd when he urges priests and bishops to be good pastors.  “Pastor” is the Latin word for shepherd, but the image of shepherd Pope Francis offers is not the one presented in traditional religious art far too often.

Like many of us in the 1950s and 1960s, I had hanging on the wall in my bedroom a lovely image of Jesus the Good Shepherd.  He was so handsome, long blond hair, draped in spotless white robes, staff in hand, and a few obedient sheep at his feet.  In reality, shepherds lived very hard lives.  They lived out in the fields to keep constant watch for anything or anyone who might steal or kill the sheep.  And as Pope Francis reminds us, the shepherds smelled like…sheep. And sheep really stink.  Really they do.

Jesus deeply and totally loves us, enough to take on the messy and smelly side of our lives.  He chooses to live with us, to search us out when we go wandering, to carry us when we are tired, and to lead us always to green pastures.  He loves us enough to lay down his life for us.  Maybe when he says to us who say we are disciples, “Follow me,” he wants us to be shepherds to those sheep given to us – sheep that are not always obedient, smart or freshly washed.  How do we lay down our lives for the sheep we are given to shepherd?