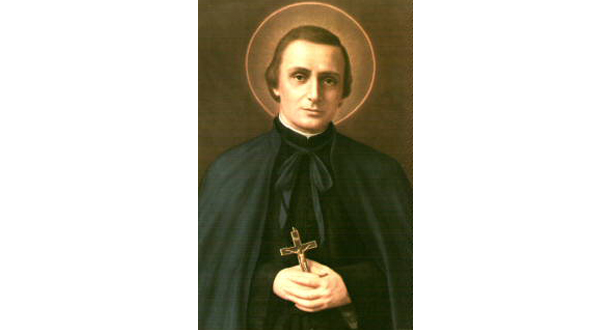 Since Easter we have been hearing of stories of resurrection and many of those are the growth of a new Ecclesia, a church, a new people of God.   One of my favorites is a story very few people have ever heard.  It is the story of a young boy named Peter Chanel and his courage to follow the call of the Holy Spirit.

Peter was born in 1803 across the Atlantic in the hamlet of La Botiere France.  The local parish priest noticed something special in Peter and convinced his parents to let him study in a small school the priest had started.  From there he went on to the seminary and was ordained a priest and assigned to a parish in Crozet.  Peter was fascinated with the stories he heard which came back from the foreign missions and he longed to be one of those who took the gospel to some distant place.  This desire was so strong that he asked permission to go to the missions. Sadly, the Bishop turned him down. Three years later he made a bold move and joined a newly founded missionary congregation, the Society of Mary.  Pope Gregory XVI agreed to the founding of a new congregation if the society would send half of their men into the newly opened mission area of Oceania.  This desire pleased Peter greatly and he left France on Christmas Eve, 1836.  Travel was slow in those days and it would take almost a year to reach their destination in the South Pacific.

On November of 1837 they arrived at the Island of Futuna.  Accompanying  Peter were Marie-Nizier Delorme, a French lay brother.   Initially they were well received by both the Islanders and Futuna’s king, Niuliki.    Without knowing any of the language and customs Peter found himself in the foreign missions; the very place he had hoped for and dreamed of for the past several years.  After three years he was having only minor success.  Only a few of the Islanders accepted baptism.  Then one day the event that would turn everything around erupted.  The king had a son named Meitala who approached his dad informing him of his desire to be baptized.  The king erupted in anger.  As King he was supposed both King and High Priest.  He was threatened by this religion of the white man.  One of the King’s warriors was told by the king,  “Do whatever is necessary and resolve this problem.”    The problem wasn’t resolved, it merely escalated.  Musumusu showed up at Peter’s home with several of his warrior friends.  After ransacking Peter’s belongings, he clubbed Peter to death.   It was April 28, 1841.   That was 177 years ago on this day.

It happened to be a week later that a trading ship stopped at the island taking Br. Marie-Nizier to the island of Wallis for safety.  Now news of the murder was out.  Ships moved very slowly and it would take almost a year for the news of this to actually get back to Europe.  Two significant things happened.  First the people of the Island were infuriated that their king would do such a thing.     The pushback the King received from the people of the Island made the king not only regret such a decision but also repent.  Second, Marists did not turn their back on the people.  They returned to the island to continue the work Peter Chanel had begun.  In due course, The King accepted baptism and became Catholic, as did all the other inhabitants on the Island of Futuna.

I can’t help but be astounded by the parallels between the death of Jesus and the execution of Peter Chanel.

Futuna to this day is still a Catholic Island, and it all started with one man who gave his life.