Solemnity of the Assumption of the Blessed Virgin Mary 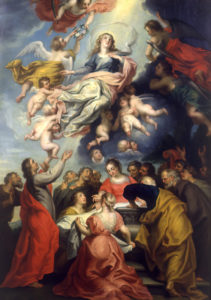 Today the Church celebrates the Assumption of Mary.   The readings given to us are the oldest writings we have honoring Mary and they reflect a tradition that began in the early church, certainly within the first 100 years after Jesus’ death.  The first reading from the Book of Revelation indicates the early community of believers had a very special place for the Mother of our Lord.  This is complemented with the Gospel, which is frequently referred to as the Canticle of Mary, and sometimes called the Magnificat. For many of us, we frequently hear this text, or recite or sing it.  But this year is different.

Is it any different than what Mary sings:   She describes a world which, because of the birth of Jesus, gets turned upside down:  And her song forces us to re-evaluate life based on our belief in Christ.

The hungry get filled with good things.
The rich are left with emptiness.
The mighty and powerful are cast from their thrones.
The lowly have been lifted up.

And she, a woman, a teenager, unmarried, pregnant, with no rights according to the Law, discovers her blessedness!    As Elizabeth says to Mary, “Blessed are you who believed
that what was spoken to you by the Lord would be fulfilled.”

Today, things have been turned upside down for all humanity in much the same way they were in Mary’s day.

I’m reminded of another story of our history which is not in the Gospel accounts either. In fact, the Church celebrated this story earlier this week.   It takes place in the third century when Christians were harshly persecuted.  It is the story of a deacon in Rome named Lawrence.  The account tells us about the remarkable deed he performed a few days before he was martyred.

A Roman official came to Lawrence demanding that Lawrence give him the treasure—or riches—of the Church. The official said that the emperor needed the money he would receive if crucifixes and sacred vessels like chalices were melted down and the gold sold.

Surprisingly, Lawrence agreed. He asked the official for three days to prepare the “treasures.” During those three days, Lawrence sold everything he could and gave the money to the poor, the sick, orphans, widows, and anyone in need. He asked all of those people then to go with him to the official. The legend says that Lawrence lined all the people up and announced to the official, “These are the treasures of the Church!”   The Roman official was furious. Lawrence was immediately arrested and brutally executed. As he was led to his death, Lawrence said these words: “I rejoice greatly because I have been considered worthy to be a sacrificial victim for Christ”

Perhaps amidst all the truths we are learning, about society, and humanity these days,  today is more about the joy and delight Mary can teach us in finding Joy in the Lord our God in spite of all the other things in our lives which are being turned upside down.  Yes there is time to respond to all that but today Mary reminds us that we need to rejoice for our citizenship is written in the Book of Life.   Knowing this priority, and God’s faithful stability, empowers us to face the challenges of tomorrow.