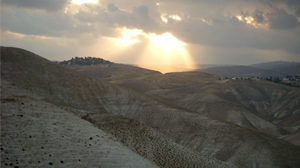 Last Sunday we began reading from the 6th Chapter of St. John’s Gospel. It is most explicitly and candidly a dialogue between Jesus and those masses of people from Galilee and from the cities of Capernaum and Tiberias who found Jesus to be at least a fascinating individual.

The chapter opened with the miracle of the feeding of five thousand from a few loaves and fishes that were brought to Jesus. Twelve baskets remained to be collected after all had eaten.

In this Sunday’s reading, the conversation is resumed after the crowds, who had lost sight of Jesus overnight, track him down across the Sea of Galilee. Jesus accusingly opens the conversation by suggesting that they have come for more food. He tells them to seek the food which does not perish but leads to eternal life. The people defend themselves by asking what is required of them to be in God’s favor. Jesus tells them to believe in the one sent by God, and they ask for a sign to prove that he is from God…a sign, like the manna which their ancestors received in the desert.

Jesus has taken hold of the conversation, and begins to expand his teaching from believing in his person, to undergoing the transformation which follows on being nourished by the life of Him whom God has sent.

So they said to him, “Sir, give us this bread always.” Jesus said to them, “I am the bread of life; whoever comes to me will never hunger, and whoever believes in me will never thirst.” (verse 35)

In later parts of this sixth chapter of John’s Gospel, Jesus will be even more explicit by identifying himself, his flesh and his blood as the food that gives eternal life (verse 53).

Most of those who read this website’s daily reflections will have heard or will hear this reading in the setting of their Sunday Mass, probably a parish celebration of the Eucharist. It will be in an assembly of the faithful, sharing the Word and sharing the Eucharist, as they share the company of Jesus and of each other in that assembly. John was prescient in placing his narrative of Jesus’ exposition on the Eucharist out in the Galilean hillsides, following on the miraculous feeding of five thousand.

Perhaps the gospel of John was not prescient, but more than likely, reflecting the changed conditions of the Church community at the time that the Gospel was completed. In the earlier Synoptic Gospels, the Last Supper of Jesus and his Apostles takes place in the context of a Jewish Passover meal. It is “by invitation only”, and Jesus uses the ritual elements of the meal to communicate his body and blood to the Apostles. One could say that the Last Supper was a private affair.

John, who had been alongside of Jesus during the Last Supper, and whose narrative of that Last Supper event is the longest text among the four gospels, does not retell the “institution narrative” when he recalls the Last Supper. There is no “Take and eat, this is my body, take and drink, this is my blood.” The Christian experience had changed too much by the time of the final redaction of this Gospel (about 85-95 A.D.). The Christian community had been excommunicated from the Synagogue, and gentile Christians were bringing Roman and Greek language, traditions and practices with them into the Church membership.

By presenting the Eucharistic teaching of Jesus in the sixth chapter of John’s Gospel, the emphasis is placed on the “openness” of the Eucharist, in contrast to the Jewish ritual meal. By separating the “Bread of Life” teaching from the manna of the desert, Jesus makes the Eucharist more than natural nourishment, but declares it to be supernatural and for eternal life. By saying that what they must do is believe in the One sent by God (verses 28, 29), Jesus takes down the barriers of Jewish prescriptions, in order to extend the invitation of the Eucharist to all people who seek Jesus in the community.

This universal call to Eucharist is such a wonderful theme for our Sunday Eucharistic celebration. In so many of our urban parishes, one need only look around at the congregation to see the vision of St. John’s Gospel, chapter 6, fulfilled. People from many nations, from many cultures, from many languages, all gathered together to listen to the Word, to share the Body and Blood of Christ, and to recognize the person of Jesus in each of the parishioners. May this Sunday’s Eucharist be a blessing for each one of us.