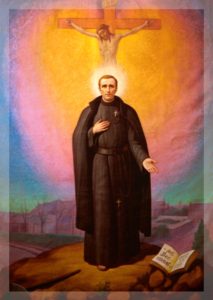 During World War I, Isidore De Loor was a Passionist brother who had very simple duties and served as the doorkeeper of our Monastery in Kortrijk – some 15 kms from the front lines in nearby Ypres, Belgium. Thousands of people passed by the Passionist Monastery going to and from ‘the front’, some ill or wounded, some being evacuated, many civilians looking to go to field hospitals to visit the sick or seek a loved one who was lost or wounded.

Isidore tended to them. Feeding them, giving them time, shelter, and a kind receptive heart. Isidore himself had cancer and was to die from that illness only two years into the 4-year war. But his illness did not stop him, and his kindness and compassion shone forth for all to see.

He was a saint in the eyes of the local people; and even some thirty years after the war, when his body was moved from a the town graveyard to a new resting place in our own monastery church in Kortrijk, some 50,000 people came to line the roads and accompany the hearse from the cemetery to the monastery.

Even in the harshest of times, kindness and love are rarely forgotten – even with the advent of many years. I think that memory holds onto kindness because the love that was behind the kind act echoes and remains.

We see this dynamic in today’s gospel text. Jesus turns towards the people because they are needy, he instructs and heals and eventually feeds them – at the very time he had sought solace and solitude having just learned of his cousin John’s death. John has been beheaded by Herod; and the man who Jesus first preached with, who he had known since childhood and presumably had encountered numerous times over the course of his life – had been cruelly taken from him in such a violent, unjust way. Jesus only wants to go to a deserted place and find time to mourn, and yet he puts aside his own needs in order to serve others.

Despite his pain, Jesus’ concern is oriented to others. He sees their needs first and he responds by feeding them. This is courageous. Love itself is courageous. Perhaps that should not surprise us, for as the writer David Whyte reminds us, ‘the origins of the word ‘courage’ is found in old Norman French, Coeur, or heart. Courage is the measure of our heartfelt participation with life, with another, with a community, a work, a future’.

Traditionally when studying today’s gospel – the feeding of the crowd – we have focused our attention on the miracle of the multiplication of the loaves and the feeding of all these people at a time and place where they felt lonely and hungry. But perhaps today, instead of focusing so much on the miracle itself, let us see its source – the generous, loving heart of Jesus revealed to us once again. He loved others even amid his own mourning and bearing the pain of loss.

Isidore followed such an example and lived it himself. Today’s gospel invites us to do likewise – Jesus even suggests this to us in the gospel text  – ‘give them something to eat yourselves’. So let us be about the master’s work, and through our loving sacrifices feed those entrusted to us.