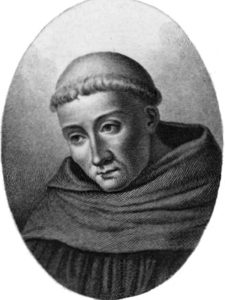 Among the many gifts that I’ve cherished over the years, are stories of the truly remarkable people who have given their lives to witness to the importance of the Gospel.  And today we’re invited to remember one of the truly great ones, St. Bernard Clairvaux.  He lived at a time when both the society and the Church were truly struggling with the chaos both within and all around them.  And, despite all the chaos, he lived his life in such a way that his peers, both friends, and foes, respected him.  As a result, he had a profound influence on the very best that emerged in his time.  He was born in 1090 and died in 1153 and created centers of stability and wisdom that helped hold his world together.

He was born into one of the noble families in Burgundy, France.  He had a great future before him in the society of his day but chose instead to give his life to God.  Against his family’s wishes, he rejected the ambitious plans they had for him and, instead, followed his heart and at age 23 entered one of the most austere religious orders in the Church, the Cistercians.  He was already so influential among his peers, he brought a total of 30 young nobles (among whom were several of his brothers) with him into religious life.  Even at the early age of 23, he was a man of prayer and his prayer life deepened quickly under the guidance of the Abbot of Citeaux, St. Stephen Harding.  Though the Cistercians lived a very austere life, they were growing so rapidly at that time that just two years after he entered, he and fifteen other companions were sent out to establish another abbey.  Bernard was elected the first abbot of this new abbey located in the Clair Valley.  He remained Abbot of Clairvaux until his death in 1153

As abbot, Bernard emphasized three important spiritual disciplines:  an austere and simple form of life, lectio divina and personal prayer, and finally, a deep personal devotion to Our Blessed Mother.  His Abbey flourished and Bernard founded three additional abbeys with the monks from Clairvaux.

But it wasn’t just within the confines of the Cistercians that Bernard exerted enormous influence.  He participated in several Church Councils, brought unity to the Papacy (persuaded most of the secular rulers to accept Innocent II over Anacletus II), and overcame several heresies that were rampant during his time.   In short, Bernard became one of the most significant religious figures of the 12th century.

As you remember St. Bernard today, I hope you have a chance to read more about his life.  He is a true example of a faithful disciple of Jesus who uses all his considerable gifts to build up the Kingdom of God.  We thank God for this remarkable man and ask for the grace to live our lives in a way that builds the Kingdom of God in our world.