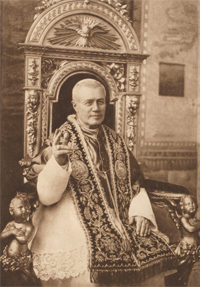 Today we celebrate the memory of Pope St. Pius X.  He has left a mixed legacy for the church.  He was a reformer both in freeing up some relatively stringent practices in the church, as well as in tightening up some theological teaching touching on the foundations of the faith, and which went by the name Modernism.  The practices he modified centered largely on the sacrament of the Eucharist, especially those restricting the approach of young children to this sacrament, and others influencing the frequency of adults receiving this sacrament.

For this reason he may serve as a paradigm for our present Pope Francis, as he pursues his pontificate in a reformist mode, and as he addresses the issue of sacramental marriage in the coming Synod of Bishops, convening in Rome this October.   Specifically, the issue of continuing practice of disallowing Catholics from approaching the Eucharist, if they have divorced and then remarried without a dispensation from the church, will be explored.

This is a delicate matter, given the relatively large number of Catholics who have gone through this turbulent experience, and who, for one reason or another, have not obtained that dispensation, while, for all intents and purposes (in the eyes of the beholder), seem to be loyal and conscientious Catholics, ardently desiring to approach the Eucharist, which is denied them.

There is a tortuous clash of values operative in such a situation: the love presumably present in the second marriage, and, to some extent, illustrative both of the words of the Lord in today’s Gospel about the greatest law binding us in our relation to God (our love of God), and also the second instance of that love, in the neighbor (presumably the spouse to whom one is now married).  Jesus obviously saw these two loves as going together rather than as pulling against one another.

The speculation prior to coming Synod of bishops is that a formula (somewhat different from the present discipline in the church) cannot be readily found to reconcile this conflict.  But, short of that, we do have the intriguing story of Ruth and her mother-in-law, Naomi, presented us in the day’s bible readings.  Obviously, there is a great deal of dissimilarity between the marital situation presented in the Book of Ruth, and the marital situation to be presented to the Synodal Bishops at their October meeting.

But perhaps there is inspirational in the complex marital situation bonding Ruth and Naomi together as daughter-in-law and mother-in-law.  In our experience this bonding has seldom been found to be a conflict-free relationship, even when the variables between these two individuals are relatively few.  For even though they may both be Catholic, may both have the same ethnic background, they may both enjoy similar educational or professional backgrounds, or may both come from the same socio-economic social class (whether that be wealthy, middle, or poor) and, most importantly, both love the same man, they frequently don’t get along, and their relationship is frigid.  It is unlikely that all this is due to an age difference.

But let us look at Ruth and Naomi.  They came from different ethnic backgrounds (Moabite, Israelite) and languages, possibly different socio-economic or educational experiences, worshipped different gods and engaged in different religious practices, and there was an age difference between them, yet they both loved the same man.  There was a lot militating against the likelihood of them spending their lives together peaceably, and yet that is how their relationship developed, even though in the beginning Naomi urged her daughter-in-law to go back to her own people.   But Ruth was the epitome of stalwart fidelity to her mother-in-law, going wherever she was going, leaving her people and nation behind, worshipping a new God, adopting new customs and language.

There was a lot going against the likelihood that this new bonding would last for any period of time.  But it not only lasted, it grew into a love story between Ruth and Boaz, her new employer, in the land to which she and her mother-in-law went.  And they married, living happily ever after.

So the love of which Jesus speaks in today’s gospel can thrive amid differences and hardships.  Pope St. Pius X facilitated access to the Eucharist for children and many adults of his era.  Perhaps the coming synod of bishops can somehow reconcile the integrity of this sacrament with an irregularity in a marriage, given the example provided today about the hazards in the relationship between Ruth and Naomi.