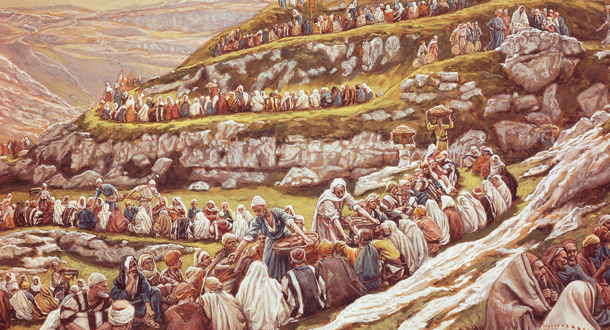 “There is no need for them to go away; give them some food yourselves.”

The theme of today’s readings seems pretty obvious: God provides the nourishment we need. And yet, tucked in there like a salad between courses at a fine meal, is this phrase, “There is no need for them to go away; give them some food yourselves.”

What is it that Jesus is asking of His disciples?  He seems to think that anyone can do this. Are they to bend natural laws and produce food out of thin air? What did He do when they didn’t seem to understand what He wanted? He took the provisions they had brought for themselves, blessed them and then gave them freely away.

Now, I’ve heard this miracle explained this way: in those times everyone usually traveled with a small bag of provisions (after all, the chances of finding a 7-11 on the way were slim). But there they were at the end of day and their bags were all running low. Some were most likely empty. People may have been thinking of how little they had or whether the person next to them would expect them to share or even demand the right of hospitality of them. Some people might have been thinking of plans on how to share it all fairly. Others might be proposing alternative methods, with complicated formulas based on age, number of children, health, etc.

What did Jesus do? He took what He had, blessed it, gave it all away, and sat down. Maybe there was a stunned silence. Maybe some of the disciples gasped, thinking, “Wait, what am I going to eat?” Then, slowly at first, then gaining momentum, people opened their own sacks and handed what they had to the people around them, keeping nothing back. Where there were suspicious glances before, smiles broke out. People started swapping recipes, praising each other’s cooking, laughing and sharing. And in the end, “They all ate and were satisfied, and they picked up the fragments left over- twelve wicker baskets full.”

Imagine the miracle of a crowd of over five thousand going from “Do I have enough and is someone going to take what little I have?” to “No, I couldn’t eat another bite, you take it, I insist!” Now, there is a miracle! All because one person gave freely of what he had to those around him.

May I find today the grace to freely share the abundance that God has given me, not only from my ‘sack of provisions,’ but from what He has placed in my heart.