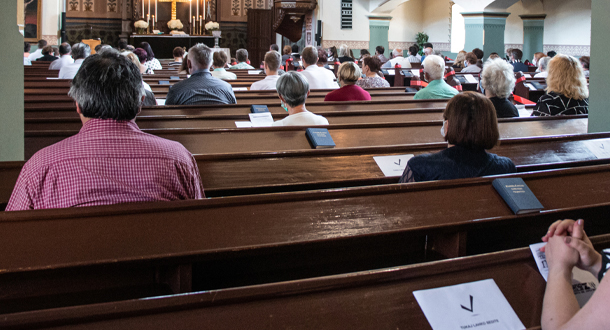 “We played the flute for you, but you did not dance.  We sang a dirge for you but you did not mourn.”  There was just no pleasing these petulant children.  They wouldn’t join in whether a happy game was played or a sad game.  That is how this generation is behaving, Jesus says.

John the Baptist lived in the wilderness, wore camel hair clothing, ate wild grasshoppers, taught his disciples to fast, and called everyone to repentance.  Some looked at John’s austere way of life and judged him as one who is “possessed by a demon.”

By contrast, Jesus was known for his eating and drinking.  It was his way of entering into personal relationships with men and women.  He shared meals as an expression of fellowship.  But, he was accused of being a glutton and a drunkard, eating and drinking with the wrong crowd.

No matter whether the message was John’s coming judgment or Jesus’ message of God’s mercy, there were those who labeled, who judged, and who condemned.  Like petulant children, there was no pleasing them.

But, “wisdom is vindicated by her works,” Jesus declares.  Jesus, the agent of God’s wisdom does the work of God.  The blind see, the lame walk, the lepers are cleansed, the deaf hear, the imprisoned are freed.  For all the petulance and judgment, Jesus is vindicated by his works.

We are an Advent people.  We await the Second Coming of our Messiah.  But in the meantime, we can’t stand around worrying about the petulance, the judgment and condemnation of the world.  We don’t have time to be labeled too conservative, too liberal.

We have work to do. Specifically, we are called to advance the Kingdom of God, right now, right here.  The Kingdom of God is not some escape hatch from this world.  God’s reign is a present reality.  People need healing, forgiveness, love and compassion.  By our works we are vindicated.  We put skin, incarnational skin, on the Good News.  We are to do this, even as we await the Coming of the Messiah.