The Feast of Our Lady of Guadalupe 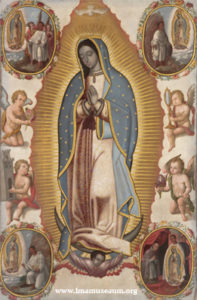 Let’s bring to prayer our present reality these dramatic and historical apparitions of Mary, the Mother of God, at the hill of Tepeyac (located in the present Mexico City) from the 9th – 12th, December, 1531 to  a native convert, St. Juan Diego. His name in native Chichimecan translates as “the eagle who speaks.”

Our Lady appeared four times to him. She appeared in an area know as “de Guadalupe,” meaning “she will crush the server of stone.” She appeared at the time of the terroristic Spanish annihilation of the native peoples of the region.

Through the incredulity-to-believability shown by Juan Diego, the message to the indigenous poor of Mexico and, subsequently, to the whole of North America, was “am I not here? I who am your mother? And, are you not under my shadow and my protection?”

While the Church in Mexico owed its foundation to the direct intervention by the Mother of God, is it not most relevant now in this world-wide threat of terror to speak of Our Lady’s role in forging a new people – a mestizo people (mixture/blend).

In meditation, this interpretation of the apparitions can affirm the continuation of native values, and social customs. It affirms the voice of Mary to women of color the world over, affording them personal dignity and respect, and, for immigrants and refugees alike the promise of sharing in the wealth and security of our country without a loss of national pride nor ethnic identity.

For those non-Hispanics the apparitions and message of our Blessed Mother remind us that one time there were no national boundaries dividing people of the Americas. In the apparition of Guadalupe, Our Lady promises to be the Mother of all who dwell in the land without borders.

Is this the Church in the world as it exists now? A spiritual and virtual borderless place of mercy, compassion, and equity.

As an out-grown from our prayer today, make a resolution, when in public to take the initiative and meet and greet the one who crosses your path, who obviously is different than you are. Is this individual, habitual act an act counter to terrorism (breeding fear and division). As the Church is living stones, so we build through inclusion of all, or else the building is not complete according to the Plan of God. Build relationships, not walls.