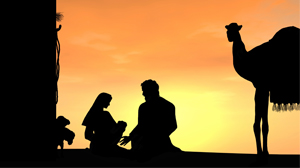 “Float like a butterfly, sting like a bee” (Muhammed Ali) articulates the secret of his success: a rapid style that belies its power.

During WWII the Japanese Zero fighter plane was master of the sky.  Initially dismissed by U.S. experts as cheap and fragile, it soon demonstrated its superior maneuverability in the skies against its US counterparts, and made believers out of their designers.

These historical vignettes highlight the unreliability of appearances in human experience: the contrast between what seems weak and vulnerable and what emerges as flexible and forceful.  They constitute the bookends of life: what is born fragile and defenseless, and what ultimately counts as strong and invincible.  The birth of the infant Jesus is aligned with His death on the cross to realign our lives on what promises to be reliable and trustworthy.

Paul of the Cross has come down in history for capturing this conundrum in his own way, with his doctrine on mystical death and divine rebirth: dying and being born again.  Unlikely correlates as contraries always are, they nonetheless constitute the framework of our existence.  We pursue our lives between them: tensile strength accrues from these two fragile experiences.

Readings for today’s Eucharist suggest these antinomies, primarily along the lines of the weak and the vincible, as in the butterfly exhilaration of an Ali, or the elusive Zero of the Japanese Air Force.  It so happens that these biblical pieces appear on December 21st, the nadir of the year featuring its shortest day and longest night.  Simultaneously, one season gives way before another.  As the Song of Songs puts it: “For see, the winter is past, the rains are over and gone, the flowers appear on the earth…”  It already aligns us toward the longest day and the shortest night.  The birth of Christ is mirrored in His death.  The helplessness of birth finds its duplicate in the waning moments of death.

The day’s readings are lyrical rhapsodies of women.  Men are next to invisible in them.  We hear of an excited bride awaiting her lover, and of Mary and Elizabeth awaiting their men children: Jesus and John the Baptist.  The readings express almost girlish cadences, fantasying the lover springing across the mountains and bounding over the hills, and shadowing Mary as she sets out on the fairly risky trip into hill country “with haste”, anxious to meet an elated Elizabeth, who will then feel her infant leaping in her womb, evoking her exclamation “in a loud voice”: “and how does this happen to me?”  Sheer joy spills out of these events.

If it is true that “The time of pruning has come”, it will merely be a moment of diminishment leading to the vine’s fullness and vigor.  Pervasive joy operates that way.  It permeates life experience like perfume, unmistakably present even in the hard times.  The two children in the womb were the cause of a joy not to be nullified by their agonizing deaths in the future.  Just as the lumbering reaction time of an aging Muhammed Ali fails to nullify the early excitement of his butterfly, bee-like movements, or like the Zero fighting plane that exhibited such prowess in its early mastery of the skies, but lives on in the design of aircraft in the years to follow.

There is exhilaration in the day’s readings not to be downgraded to the proverbial “flash in the pan”, like a meteor streaking momentarily across the darkened heavens, only to be lost in space and forgotten.  Rather it transmutes into a leitmotif woven into the fabric of life, functioning as a theme all the way to the end,  through the hard times.  Do we not recite the joyful mysteries of the rosary, knowing they will not be cancelled out by the sorrowful mysteries to follow?  While  winter follows fall, another spring is always on the horizon.  A life affected by the never-to-be-forgotten birth of Christ is forever tinted.  Paul of the Cross perspicaciously entitled his spiritual masterpiece: MYSTICAL DEATH AND DIVINE REBIRTH, not Divine Rebirth and Mystical Death.  He realized that life overcomes death, not vice versa.  Today’s biblical passages propose to color the Christian way of life indelibly, not to be erased by events to follow.

Fr. Sebastian MacDonald, C.P., is a member of the Passionist community in Louisville, Kentucky.