The Solemnity of Christmas 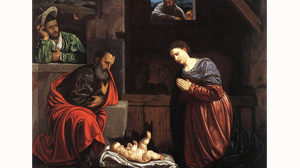 Christmas is such an important liturgical event in the Church’s calendar that it have given us three Masses to lift up the importance of this day.  There is the Mass at Midnight, at Dawn, and for the Day.

Luke is the only synoptic to develop the nativity event.  Luke is the only synoptic to use the term “Savior.”  It is the text used in the Midnight Mass.  We are told that Mary and Joseph have to leave Nazareth to go to Bethlehem, about eighty miles, to complete a census required by the Roman Government.  Every fourteen year such a census was demanded.  Right off we are told that Israel is occupied by a foreign forces.  Citizen regardless of their conditions must comply.  Israel was a land of anguish, destruction, forced deportation, filled with outcasts.

Luke also tells us that when it was time for Mary to deliver her child, there was no room for them in the Inn.  An Inn is simply a fenced in area where animals and their owners can settle.  The implication is that Mary and Joseph deliberately chose to stay in a stable, where there would be more privacy.

Luke further tells us the first to know about the birth of the child, were shepherds in a field tending their sheep.  What is unusual about this is that shepherds were considered outcasts of society.  In the eyes of society they were considered to be of shiftless and dishonest character.  In the Old Testament they were classified along with prostitutes, publicans, and tax collectors. They were selected to be the first to hear the Good News that the Messiah was born, the Savior.  They received the message and went to witness the Child wrapped I swaddling clothes, with Mary and Joseph.

It is important to note that the Shepherds announced to Mary and Joseph what they were told by the Angels.  They also proclaimed the good news to all they met, and were filled with joy.  It is not to be missed that the first to preach and proclaim the Good News of the Incarnation were these shepherds, the poor, the despised, the outcasts of society.  Everyone is responsible for sharing the Good News, no matter who we are, and what our circumstance may be.  And it also important for us to listen to the Good News, Salvation is present to us.

We are moved with humility, because God loved us so much the Son, became incarnate, one with us.

He was born in need, a prerequisite for the Reign of God.  He was born of a young couple on the road, in a manger.  He was first recognized  and proclaimed by shepherds, societies outcasts, not royalty, or wealthy, but the poor and lowly.

How do we get to Bethlehem?  Like Mary and Joseph, by our routine family responsibilities.  Like the shepherds, we need to listen for the messengers of God, who bring the Good News to us.  When this happens we are restored to wholeness, which the Incarnation brings.  We are rescued from sin and our alienation from God.  And, God become immanent.  Through us God is made present to the outcasts.  Jesus, who became one with us, saves us from destruction and self isolation.  Karl Barth said that “The Incarnation, is God’s search for human kind.”  This search is continued through you and me as we live out the mystery of God taking on human nature.  This continues through the Church.  This continues the reality that is Christmas.  Have a Blessed and Merry Christmas.