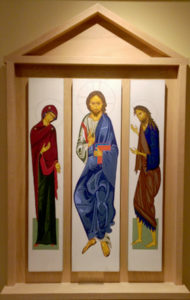 In 1935 the play Murder in the Cathedral by T.S. Eliot, was published. The play focuses on the story of the death of Thomas Becket who was the childhood friend of Henry II of England. When Henry II ascended the throne he appointed Thomas as the Primate of England or Chancellor. Today that would be the Prime Minister. Everything was going along fine when Henry II decided that the Church had more power than he did and so wanted an inside man to help him with gaining control. Becket pleads with him not to appoint him Archbishop of Canterbury, which today is the highest ordained position in the Church of England, the Queen is considered the head of the Church of England. And all of that history is another story. Becket is already a deacon in the Church and so he is ordained a priest and the next day elevated to Archbishop. Over the course of several months Becket is changed by his position. He helps the poor and serves as a faithful shepherd of the people. Henry II and Becket disagree several times on matters of the Church and State. One night, in a drunken fury, Henry II makes a comment about being rid of the bothersome Archbishop. Four loyal knights interpret this as a command to assassinate Becket and so in the middle of the night they ride off to Canterbury Cathedral and murder him as he is saying a private mass.

The First Letter of John gives us the message of walking in the way of Christ through the commandments. The two commandments that Christ gave to his Apostles and us; To love God with all our heart, soul and mind and to love our neighbors as ourselves. The message goes on to speak about what it means to walk in the light and what it means to walk in the darkness. Two leaders of England made choices. One walked in the darkness of wanting more power and the other followed the path of Light and was changed by that Light. Even in the time of Jesus there were people who thought that they were following God through the commandments and the multitude of prescribed laws. But instead became blinded by them and were unable to see the true Light when it appeared as promised.

Christmas is a reminder for us that the Light has come into the world and that we can choose to walk in the Light or to choose the path of darkness. Simeon, a man waiting in the Temple for the Messiah is blessed by God to be able to see the true Light before he died. He spent his life waiting patiently for that moment. What a great joy that must have been for him! The words of Simeon, from today’s Gospel offer us food for thought:

“Lord, now let your servant go in peace;
your word has been fulfilled:
my own eyes have seen the salvation
which you have prepared in the sight of every people,
a light to reveal you to the nations
and the glory of your people Israel.”

We don’t need to wait. The Light of the World has come, Emmanuel.

May the coming New Year bring you peace and joy!