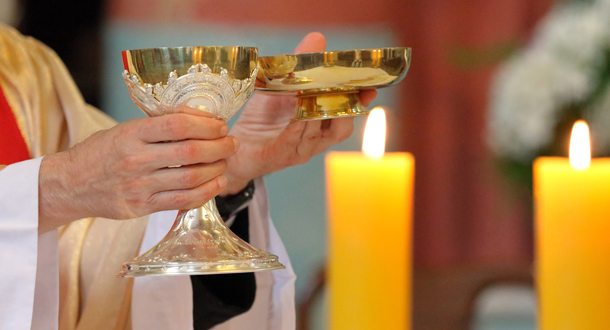 Some of us remember many years ago, when Catholics were called to observe meatless Friday every week.  Schools, public and Catholic, would serve grilled cheese sandwiches.  The main dinner course at home was fish sticks.  Even restaurants featured meatless Friday specials.  We abstained from meat as a kind of penance and sacrifice to remind us of the passion and suffering of Lord on the cross on Good Friday.  But sadly, over time, many forgot the purpose and meaning of meatless Friday.  No meat? No problem.  How about a feast of salmon steak or grilled trout?  Meatless Friday became for many an empty ritual.  And so, in the late 1960s, Pope Paul VI allowed bishops to end that discipline.  Catholics were now to choose their own meaningful abstention or sacrifice.  (Interestingly, the bishops in England and Wales in 2011 restored meatless Friday.)

Something similar happened with the Jewish ritual of hand-washing and purification of vessels.  It originated to express a deeply felt reverence and love for God.  But by Jesus’ time, the meaning was forgotten.  The Pharisees continued imposing and expanding the rule, even though it had degenerated into an empty and oppressive ritual.

They were scandalized that some of Jesus’ disciples ate their meal with unclean hands.  The phrase in the Greek is literally ate breads, linking this dispute with the miracle of Jesus feeding the 5,000 who ate breads in Mk 6:35-44.  The Pharisees were angered, even though the crowd in the wilderness had no opportunity to wash their hands.  They challenged Jesus on this breach of ancient tradition.

Jesus responded by calling them hypocrites, literally stage actors, whose outward apparent piety disguised their empty hearts and empty ritual.  Jesus was not rejecting tradition per se.  Rather, he was rejecting their human tradition and their hypocrisy in how they practiced these traditions.

Like the Pharisees, we too may risk turning meaningful traditions — and disciplines — into empty legalistic and oppressive ritual.  Whether it is the ritual washing of hands for the Jews of Jesus’ day, or in our day Friday abstention, or even the way we celebrate at Eucharist — do we merely consume bread and wine, or are we transformed by the body and blood? — today’s Gospel reminds us that rituals and liturgy have the power to transform us only when our hearts are grounded in God’s love — especially when we, who are in the wilderness, are in need of God’s cleansing grace.