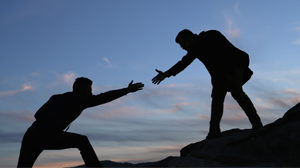 Sometimes what seems the best and most promising path to take reaps consequences utterly different than what we anticipated. And sometimes the path we initially want nothing to do with is actually the one that opens to fullness of life. That’s one indisputable conclusion from today’s readings.

The passage from Genesis recounts the familiar story of the building of the Tower of Babel. It begins with a scene of absolute harmony and peace. We’re presented with a people in whom there is no animosity, no conflict, and no disheartening divisions. As the writer of Genesis comments: “The whole world spoke the same language, using the same words.” But then everything changes. They decide to replace God’s vision for the flourishing of the world with an ambitious plan of their own. They will “build…a city and a tower with its top in the sky, and so make a name” for themselves. Instead of praising and glorifying God, they thirst for glory for themselves. They forget that they are not gods, but creatures who are forever dependent upon God. Thus, it is no surprise when their heady project leads not to the security and fame they envisioned, but to chaos and dissolution. The harmony and peace they enjoyed is shattered as they are “scattered…from there all over the earth,” no longer able to understand one another.

By contrast, in the gospel story from Mark, Jesus asks us to find life by following a path that goes against the grain of everything we’ve been taught to believe. Jesus invites us to find life not through self-promotion or self-aggrandizement, but by taking up our cross and following him. It’s a life characterized by self-denial, generosity, sacrifice, and a love that endlessly calls us out of ourselves for the sake of others.

Babel and Calvary. They are symbols of two very different ways of life. Which one we choose to follow makes all the difference not only for ourselves, but also for the world.