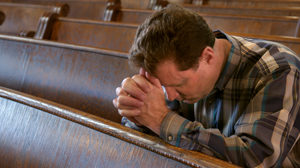 Are you one of those people who find it very easy to identify with the father described in the Gospel?  I surely am.  He’s clearly desperate in trying to find a way to help his young son.  As today’s Gospel begins we find the father arguing with the disciples.  He’s arguing with them because he had brought his son to them for a cure but they were unable to cast out the mute spirit.  I wonder what he was telling those disciples?  Perhaps he was abrading them because they’d failed to heal his son and was trying to persuade them to “try harder.”  Or, maybe he was calling them fakes and phonies because they’d promised so much but had delivered so little.  Whatever the topic of the “arguing,” you can hear his fear and discouragement in his dialogue with Jesus.  Jesus tells him that everything is possible for one who has faith.  The father desperately cries out, “I do believe, help my unbelief!”  He wants to believe with all his heart, but is struggling with all his previously dashed hopes.  But, his prayer for belief is enough for Jesus who then casts out the mute spirit from the boy.

When things settle down, the disciples ask Jesus how he was able to cast out the mute spirit when they had failed so miserably in their attempts.  Jesus responds, “This kind can only come out through prayer.”  Jesus never makes clear whether it was his prayer or the young man’s father’s prayer that accomplished the miracle.

It’s easy for me to identify with the father in this story because there are so many situations in my life that I know would be better if only I had enough faith.  It’s fairly easy to become discouraged, even overwhelmed, by personal failures or dashed hopes.  Yet, Jesus shows such great compassion to this worried father, who didn’t feel he had enough faith.  Jesus, help us believe in you and trust that you will give us what we need in spite of our lack of faith.