Memorial of the Chair of Peter 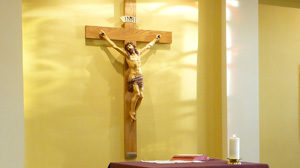 Feast of the Chair of St. Peter?  Really?  May I please have some other feast to think about?  Even an ordinary day in Lent will do!!!  What should I say after I describe four legs, a seat and a back?  We don’t even know what materials were used to build the chair.

On second thought – perhaps we do.

One commentator reminds us that in ancient Rome, families remembered their dead at a feast in late February by placing an empty chair at the feast.  Since the early Christians did not know the actual date of Peter’s death, they placed a chair for him at the table when they celebrated this Roman feast.  They took over and made the Roman practice a Christian one.  For them, the chair came to symbolize the authority of Peter and his successors and the doctrines they handed on to the followers.  This was the first of several elements which, when combined, were used to build the chair of Peter.

A more fundamental element was the person of Peter himself.  He was the leader Jesus Himself chose to tend the initial flock of followers.  Jesus chose him because of his strengths and  abilities as well as  because of his weaknesses.  Jesus saw beyond Peter’s flaws and understood that Peter’s mistakes would make Peter a more understanding, more forgiving, more compassionate shepherd of the flock who were so very human themselves.    We sense this very keenly in Peter’s first letter which we read today.  Peter offers his assistant shepherds advice gained by experience.  He tells them to tend the flock by example rather than by power, always remembering that the Risen Lord Jesus is the Chief Shepherd and the rest of us are his disciples.  Always merge your own mind and heart with that of the Lord and you will never  provide false direction.  When celebrating the chair of Peter,  we are called to reflect on our first shepherd himself as a main component in the construction of the chair.

A third essential ingredient in manufacturing this special chair flows from the exchange between Jesus and Peter in our gospel passage today.   How is it that Peter knows that Jesus is the Christ, the Son of the Living God ?   I would suggest that it flowed from Peter’s observation of Jesus, from his listening to the teachings of Jesus, from his choosing to live his life in imitation of Jesus over these several years of discipleship.  In all of this, Peter’s mind and heart had been tilled and fertilized by the Holy Spirit preparing him for that moment when it would all make sense – You are the Christ, the Son of the Living God.  It was living the life of a disciple that made this all possible.  This is the seed bed of Peter’s exhortation to lead by example rather than commands.  It is the living of the faith life that speaks most eloquently of the Gospel of Jesus.  If we live with each other and we deal with the problems of our lives reflecting the mind and heart of the Lord Jesus, then we faithfully provide direction, encouragement and fertile ground for the expansion of the Kingdom in this world.