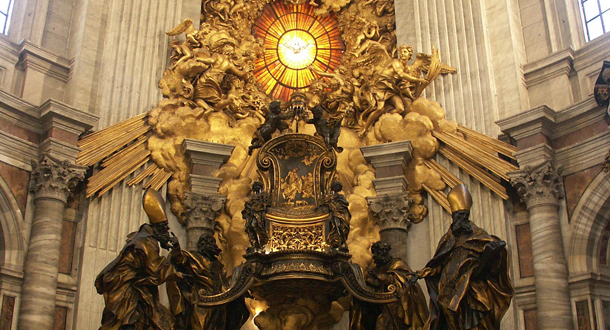 Today is the feast of the Chair of Saint Peter.

Jesus himself handpicked his twelve apostles. Of those, Peter was chosen to lead them. The other Apostles did not challenge his authority as the head of the church on earth.

Not only did they not challenge his authority, they respected it. This is reflected in the gospel of John (20:4-5) when, although John was younger, and faster, he waited for Peter out of respect for this position as chief Apostle.

Other examples of this respect of Peters authority by the other apostles comes after Christ resurrection and include when Peter presides over the election of Matthias to replace Judas (Acts 1:26) and when he leads the Council of Jerusalem (Acts 15).

St. Paul “goes to see Peter” out of respect for his position (Galatians 1:18).

Of the 12 apostles in scripture Peter is mentioned 195 times, John is second with, in comparison, a mere 29 times.

In Matthew chapter 10, where Matthew lists the twelve Apostles, He says, “the names of the 12 are these, FIRST Peter.”

The most important reason Peter is the authority that we look to as the first Pope, is written in the Gospel today, Matthew 16:13-19

“He said to them, “But who do you say that I am?”
Simon Peter said in reply, “You are the Christ, the Son of the living God.”
Jesus said to him in reply, “Blessed are you, Simon son of Jonah.
For flesh and blood has not revealed this to you, but my heavenly Father.
And so I say to you, you are Peter,
and upon this rock I will build my Church”

Christ named him, the Apostles followed him, the early church was built respecting him. There have been 266 direct in line from him. Christ has built His church on Peter and although we humans have tried to wreck it, “the gates of the netherworld shall not prevail against it.”