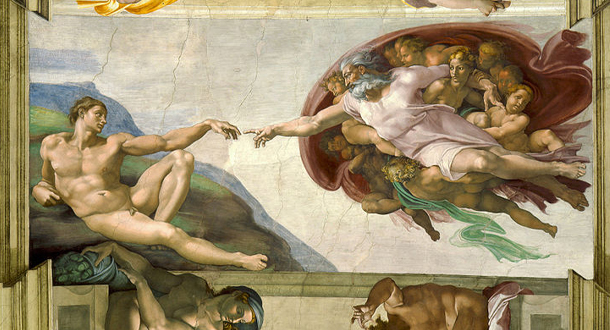 The boy became so much like a corpse that most of them said, “He is dead!” But Jesus took him by the hand and raised him; and he got up. – Mark 9:27

The captivating 5,381 square feet fresco of creation on the ceiling of the Sistine Chapel is among the best paintings in the world.  We see the life-giving finger of God stretching to touch the weak, lifeless and listless hand of Adam.   The New Testament is filled with people trying either to touch Jesus or to feel the grasp of Jesus.   There are about 5 words for touching Jesus in the original inspired text of the Greek New Testament.  But basically, they point to one simple great theme of getting in touch with Jesus!

This dominant theme is clearly seen in Mark 9:27.   The boy is all but dead but Jesus takes him by the hand and he stands up!  The verb used here is kroteo which means a strong grasp by the hand of Jesus!  The word has a strong nuance of strength.  It is used 58 in Gospels.   The woman in Mk 5:28 said to herself:” If I just touch His garments, I will get well.”  Here the word for touch is haptō which means to attach oneself to somebody.  It is used 39 times.

Another strong word for being grasped is epilambanomai in Mt 14:31   “Beginning to sink, Peter cried out, “Lord, save me!” Immediately Jesus stretched out His hand and took hold epilambanomai of him, and *said to him, “You of little faith, why did you doubt?” The Greek means “to grasp for oneself,” “to lay firm hold of,” “to bring into one’s sphere” etc.  Used 29 times.

These words along with others clearly proclaim the simple wisdom of Scripture: Jesus must get His hands on me so I can touch Him. “ Over a hundred times in Gospels Jesus is touched or touching.    We must believe we can touch Christ now just as much and more than the people in Biblical times.  Faith provides the eyes and hands for our encounter with Jesus!  It is extremely important to remember that the hand that I touch is a wounded one!  “See My hands and My feet, that it is I Myself; touch Me and see,”  Lk 24:39   It is the most loving and healing touch in the cosmos!

“Wherever He entered villages, or cities, or countryside, they were laying the sick in the market places, and imploring Him that they might just touch the fringe of His cloak; and as many as touched it were being cured.”    Mk 6:56