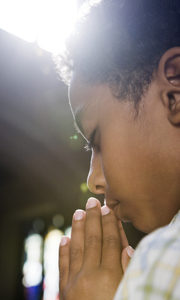 Some years ago a TV commercial for AT&T depicted a young Mother in the kitchen hurriedly preparing breakfast for her little ones. One of the children pleads, “Can we go to the beach today?” and Mom’s quick reply is, “No, sweetheart, I have a meeting with an important client today.” Spontaneously, the child responds, “When do I get to be a client?” Of course the next clip is from the beach, where Mom is conducting her business from her AT&T cell phone!

In today’s Gospel the disciples decide that Jesus’ time and energy is too precious to be spent with little children. And Luke then tells us that Jesus became indignant. It’s not the only time we hear of Jesus’ exasperation.

Remember the episode when Jesus overturns tables in the temple? We are told it wasn’t merely tables and doves and coins that he was upending, but the entire religious system of his day… In the first chapter of Isaiah, God tells us that burnt offerings and animal sacrifice disgust God!  Instead, we are told to “…make justice your aim: redress the wronged, hear the orphan’s plea, defend the widow.”

Jesus also gets indignant when the table crowd seeks to condemn the woman who anoints Jesus with aromatic oil shortly before his death. There is a pattern here; Jesus is always protecting the dignity of the human person… especially the least, the last, and the lost. Children included.

Today, with countless threats to immigrants, refugees, government safety nets for the poor, and the environment, …we, too must be indignant, we, too, must “read the signs of the times” (Matthew 16:3).  Last week, San Diego Bishop Robert McElroy spoke,

“Always find your foundation for reflection and action in the fullness of empirical reality…This is an especially important anchor for us, in an age in which truth itself is under attack. Now we come to a time when alternate facts compete with real facts, and whole industries have arisen to shape public opinion in destructively isolated and dishonest patterns. The dictum “see clearly the situation” has seldom been more difficult in our society in the United States.”