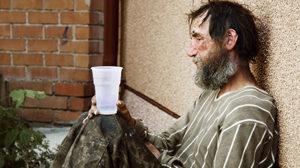 Can a person have an identity separate from their Christian identity?  Have you ever met a person who has one identity on Sunday but a different identity during the week?  I believe our true self, when we are most authentic,  is when we are rooted in Christ.  Who we are, is who we are in Christ.  And the readings this Sunday encourage that authenticity.

Our Gospel this fifth Sunday in Ordinary Time continues with where we left off last weekend.  Recall last Sunday, Jesus goes up on the mountain and begins to teach people.  He looks at those who have come out to hear him and sees people who are broken, lost, and trampled upon by society. And he calls these people  “blessed”.  He looks at those who have brought their relatives and friends to the mountain and he calls them “blessed”.  He looks at those whose lives are not complicated, in a simplistic way he asks, Do you know how blessed you are?   All the people gathered around him he invites to look at their blessedness. And so we continue with that teaching.

Today, he looks at those same people and instead of calling them “blessed” he now tells them that they are light, and they are salt.  Obviously, light is something that illumines, while salt’s purpose is to preserve and flavor.  How difficult would it have been for someone sitting on the hill that day to hear this?  Think about those whose lives were perpetually discredited, whom society frowned upon, and couldn’t make a contribution to society.  Many of those gathered at Jesus’ feet had no voice.  They were never listened to.  They were perpetually overlooked.  And if they tried to speak up they would have been quickly silenced and put in their place.    What must have their self-image and self-worth been like?   And to these people Jesus says, “You are Light.  You are Salt!”   For those hearing this for the first time, I wonder how many couldn’t hear it.  For being told by society for so long and so many years you are a nobody, being programmed to believe this, to hear someone like Jesus think highly of you or to see value in you when perhaps you couldn’t even see it in yourself may have certainly led to disbelief.   I wonder how many really questioned Jesus saying, “Seriously, I’m not light, I’m not salt.”  Then Jesus’ response would be, then obviously, you don’t know who you are.

Isaiah instructs us twice in this first reading that if you want your light to shine forth, if you want to shine with the glory of the Lord then it is as simple as sharing bread with the hungry, sheltering the oppressed and the homeless, clothing the naked.  Matthew will restate this in the judgment scene directly before his passion narrative.  “When I was hungry you gave me food, I was thirsty and you gave me drink.  I was a stranger and you welcomed me, naked and you clothed me.  I was ill and you comforted me, in prison and you came to visit me.  I assure you, as often as you did it for one of my least ones, you did it for me.”  (Matthew 25 :35,36, 40)  As believers in the risen Lord, this is our fundamental job description.

I’m also thinking back this day to a quote originally attributed to Mahatma Gandhi, but also borrowed, modified and reused by other political and religious leaders including Herbert Hoover and Cardinal Roger Mahoney.  “A nation’s greatness is measured by how it treats its weakest members.”

It really doesn’t require discovering God’s light first and then planning a strategy of how we can let that light shine.  It’s first and foremost allowing ourselves to be so rooted in Christ that apart from Christ, I know that I am nothing.