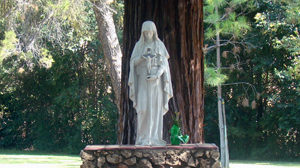 Mardi Gras! Rio and New Orleans will be featured in the news as crowds celebrate. Another Carnival, on the scale of world famous takes place today in the city of Oruro, in the Bolivian Altiplano. It is the largest tourist attraction in the country. It is religious, dedicated to the Blessed Mother, and has several days of traditional folk dances through the city and ending at night in the plaza of the church built over an old mine shaft.

The story says that the people of Oruro were all good people, the best, but demons came among them bringing division so that they no longer shared a common language and no longer cared for each other. A savior came, a woman, who battled the demons sending them underground into the mines. The battles are described and the victory of the woman still visible as in the undulating hills outside the city that was once a giant serpent then turned into stone. The conquistadors and Spanish missionaries stopped in the Altiplano, attracted by the silver excavated from the mines, they heard the story of woman who saved the people and added at the ending, ‘and the woman was Mary, the Mother of Jesus’.

Another event would be added in later years. A robber and murderer was wounded on night and crawled into a mine shaft where he would die. Before he died Mary appeared to him offering forgiveness and peace. Built over this mine shaft is large church.

One of the beautiful folk dances of the Carnival is the Dance of the Devils. Perhaps 50 men saunter down the route of the parade. There is one woman, the devil’s wife, and one dancer dressed in armor and bearing a sword, St. Michael. As they move on Michael dances among the demons and ends up by having them subdued and now dancing to his tune, bringing order out of the chaos of their evil. Each night as the parade ends the final dance is the Dance of the Demons in the plaza of the Church of the Mine Shaft. At its ending the devils are sent into the mine shafts below the church and the crowds enter to celebrate mass.

Tomorrow we go out to do battle with the demons, to deal with the chaos left behind when sin breaks loose. We are armed with prayer, fasting and good works in our battle; our sword is the cross. We have a focus and place of refuge in the days ahead.

Psalm 84 tells us, ‘how lovely is your dwelling place, O Lord; my heart and my flesh cry out for the living God.’ And, while Mary will be most present at the end of Lent, she can be present with us each day. The Spiritual writer and mystic Carryll Houselander reflects that on Calvary Mary will die to herself, although she was already without sin and selfless. As her Son dies for all of us, so Mary united with her Son empties her very being so she can see in each person her Son, and love each of us as her Son and be our Mother.

Let us awake tomorrow to our Lenten journey with peace and security and set off in the company of Mary.